The Wife likes to go to Wal-Mart.

Often, when she goes towards the girlie stuff -- fabrics, notions, knick-knacks, paddywhacks, whatever -- I will often head towards the electronics section, mumbling, "I need to check on blah blah blah."

Last time we went to Wal-Mart, though, I didn't. I followed along, pushing the shopping cart.

She headed to fabrics. And I saw something I didn't expect to see. Other than me in the fabrics section, that is.

She was looking at patterns.

You see, I'm not sure how much, if any, of what patterns are I actually need to explain.

If you don't know what I'm talking about, it's semi-see-though paper that has sections marked off that are used to cut fabric for sewing together to make something.

Anyway, we were at Wal-Mart. The Wife went to fabrics, I followed her, and she stopped at patterns. 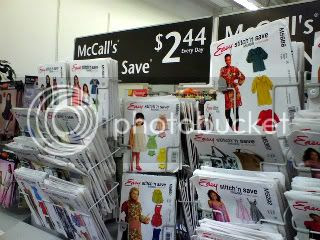 There were McCall's patterns there.

Didn't that used to be a magazine?

Well, it sure did.

My grandmother used to get McCall's magazine. I don't remember what was in it. Probably lady stuff. I do remember my sisters would cut out and play with the Betsy McCall cutouts inside the back cover.

That was a long time ago.

In 2001, Rosie O'Donnell got involved with McCall's magazine in some way, and it became Rosie magazine. It lasted a little over a year before it folded.

Anyway, I thought that was the end of McCall's.

Turns out I was wrong.

McCall's still does patterns, under the brands McCall's, Butterick, and Vogue.

I smiled when I saw the McCall's patterns, because it reminded me of the old magazine that was at Grandma's house.

The Wife bought some patterns. Maybe she'll make something. She probably will.