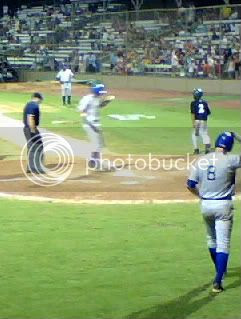 The Catfish beat the Savannah Sand Gnats (Mets) 7-5 to complete a 4-game sweep, a perfect 8-0 road trip, and their 9th straight win.

The game was remarkable in one other way: the Catfish won the game despite being out-hit by Savannah, 13-5.

The Catfish jumped out to an early lead. CF Maiko Loyola, SS Shawn O'Malley and RF Reid Fronk walked to start the game. 3B Greg Sexton drove in Loyola on a sacrifice fly to right. DH Quinn Stewart singled to right, scoring O'Malley, then LF Stephen Vogt singled to right, scoring Fronk. 1B Henry Wrigley began his birthday celebration by driving in Stewart and Vogt on a single to left-center, putting the Catfish up 5-0. It would be the last Catfish hit until the 8th inning.

Savannah fought back with runs in the first 3 innings, closing the gap to a 5-3 score.

In the 5th, the Catfish picked up an unearned run. Loyola walked, moved to 3rd on an error on a force attempt, then scored on a sac fly by Fronk.

Savannah scored a pair of runs in the bottom of the 5th, cutting the lead to one run: 6-5.

In the 8th, the Catfish picked up a run on Reid Fronk's homer over the right field wall, setting the final score of 7-5.

Wrigley was the only Catfish batter to get multiple hits, a 1st-inning, 2-RBI single, and a 9th-inning triple.

The win was the Catfish 2nd straight sweep, and concludes an 8-0 road trip. The win extends their season-high winning streak to 9 games.