Lookin' for a Cathouse

One night this week ... after the Wife and I talked about it ... we decided to find a cathouse.

It's not something that everyone does. People have different opinions about things ... including using a cathouse.

Age has nothing at all to do with the decision. And we weren't looking to spice things up. But lately, the last few days in particular, we each had the idea in the back of our head.

Well, we spoke hesitantly about it, realized we were both thinking the same thing, and decided to find a cathouse.

So, one night this week, after work, we figured it was the night to do it. 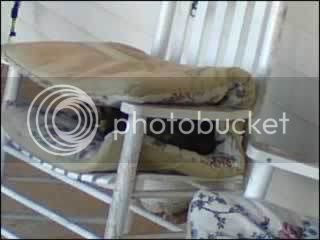 You see, a couple of days before Christmas, a cat showed up on our front porch. She was skittish and stayed away from us. But she had decided to take up temporary residence out of the rain and cold, and our porch was the best place, in her little cat brain.

Heck, I'd have to agree. We don't have a bunch of stupid, mean dogs in the yard. Other dogs from around the area will come into our yard and crap all over the place, but on a cold, rainy night, it's dog-free.

So the cat decided to take up shelter in one of the rocking chairs that had its padding folded over, forming a small, comfortable niche.

The next day, she was still there.

Now, I'm not opposed to having pets. But I'm an outdoor pet person. The only pets inside are goldfish. The Wife likes indoor pets, but not me. But I'm okay with outdoor pets. And this cat was outdoors.

Christmas Eve, I left the hen party at the Mother-In-Law's early and went home. Found the cat still there. I called the Wife and told her the cat was still around. She mentioned something we had in the fridge, so I fed the cat.

The cat stayed on. I mean, no dogs chasing her or anything. People feeding her. She's not a dummy.

Now, the Wife and I don't leave a lot of leftovers. We eat pretty good. So, we bought some cat food.

That also waters the cat.

Anyhow, with the cold weather coming on, we thought it might be better to have something more than folded-over rocking chair padding. So I got a pasteboard box, put an old t-shirt in it, and put it on the porch. But I knew that wouldn't be the best.

So, this week, we decided to get something a little more ... substantial ... for the cat.

We went to town looking for a house for the cat. A cathouse.

Email ThisBlogThis!Share to TwitterShare to FacebookShare to Pinterest
Labels: Cat