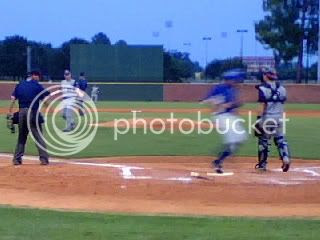 The Columbus Catfish' winning streak came to a halt tonight.

The team they replaced in Columbus, the current Lake County Captains (Indians) outscored the Catfish 11-8, ending the Catfish streak at nine games.

Prior to the 2003 season, the Lake County Captains were the Columbus RedStixx, and the Catfish were the Wilmington (then the South Georgia) Waves. In the final series between the last two teams to call Columbus home, the old team took the first of four games.

Lake County got on the board first 2 runs in the 2nd and another in the 4th.

In the 5th, the Catfish got on the board. 2B Chase Fontaine doubled and stole third. With 1 out, SS Shawn O'Malley doubled, sending Fontaine across the plate, and cutting the lead to 3-1.

Lake County got the run back in the 6th.

In the 7th, the Catfish scored a pair. Fontaine walked to lead off the inning, moved to second on CF Maiko Loyola's single to left. Both runners moved up on a passed ball. Then, with 1 out, LF Reid Fronk drove Fontaine in on a sacrifice fly. 3B Greg Sexton singled, putting runners on the corner. RF Quinn Stewart drove in Loyola, cutting the lead to 4-3.

Lake County got the runs back in the top of the 8th, taking a 6-3 lead.

The Catfish finally tied it in the 8th. 1B Henry Wrigley reached on an error. With 1 out, Fontaine walked. Loyola reached on an error that allowed Wrigley to score and left both runners in scoring position. O'Malley drove in Fontaine on a ground out to second. After Fronk walked, Sexton drove in Loyola with an RBI single, tying the game at 6.

It stayed that way until the 10th when Lake County broke it open, sending 5 runs across the plate.

The Catfish scored a pair in the bottom of the 10th when Sexton hit a 2-run homer, making the score 11-8, but the Catfish were unable to do any more.

The loss spoiled an otherwise good offensive show by the Catfish. Every batter reached base at least once. Loyola and Sexton each went 3-for-6, while Fontaine was 2-for-3.