Racist video of the day

Dan Rather: (Obama) is a nice person... but he couldn't sell watermelons if you gave him the state troopers to flag down the traffic.

Now, in all honesty, I don't think Rather was saying anything about Obama that he wouldn't say about Bush, Carter, Clinton ... or me. Of course, if he did say it about me, he'd be wrong. How do I know? I've sold watermelons ... and didn't need state troopers to flag down traffic.

Rather will get a pass. Not because it was not intended to be racist, but because of his liberal cred. However, if someone from Fox News had said this, there would be a lynching.

Or is that racist? 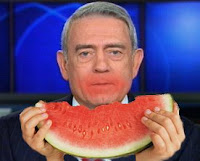 One additional thought: On the bright side, since the left is giving Rather a pass on this, it's now okay to refer to Obama as "That Watermelon Salesman"
By Basil at 3/08/2010 06:51:00 PM