Just got back from burying a brother-in-law. Well, I didn't actually bury him. But I helped carry his casket.

Benny was a great guy. He was married to my younger sister (The Mean One). I knew him back when she was dating his cousin. But that's another story. Today, I want to share with you just a few thoughts of Benny.

He was one of the first house-husbands I knew. After he and my sister married, they lived the life of a young newlywed couple. They didn't have much, but cherished what they had. After three years, my oldest nephew was born. Benny stayed home with the baby while my sister worked and went to school.

You'd always see Andy's head first, about chest high, as the baby was always stretching out, looking where he and his daddy were going. The door would open, Andy's head would appear, followed by Benny, carrying his son.

Benny worked at the warehouse of one of the furniture stores in my home town. He had a good crew there. He thought the world of them, and they of him. He enjoyed his work. Well, most of the time. Like anything, like any job, he'd get frustrated from time to time. But at the end of the day, he spoke highly of the folks he worked with and where he worked.

They thought lots of him too. When the funeral procession went by the warehouse Monday afternoon, some were at work. But they were lined up outside the door, watching.

Benny worked until his illness prevented him from being able to drive and do the strenuous work involved at the warehouse. It was a debilitating disease, similar to Parkinson's or ALS. But it wasn't either of those.

Still, after he couldn't drive, he'd walk. And he'd do volunteer work at the hospital. He was always trying to do something for other folks.

In fact, in the foyer of the big Baptist church in my home town, is a picture -- several actually -- that are part of a certificate of appreciate that was sent to the church following a mission trip. 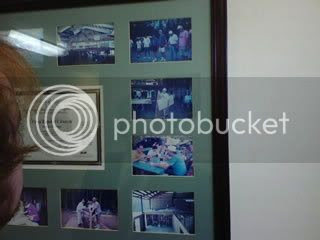 One of the pictures ... reproduced in poor quality here ... shows Benny carrying, not one, but two, sheets of plywood as part of the work being done. 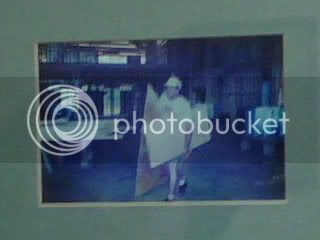 And that's Benny. The mission trip was in 1996, but he had already begun suffering from the disease that eventually claimed his life. But he had traveled hundreds of miles to help do work for someone else. And he's giving it his all.

Benny's life was a lesson for us all.

Don't let circumstances prevent you from doing anything you want to do.

Always do your best.

If you can't help yourself, help others.