What's in your wallet? 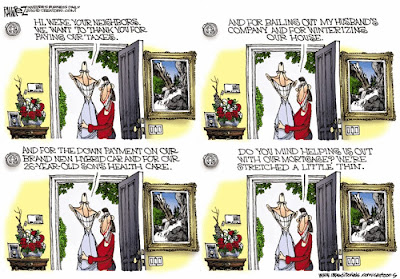 The government isn't exactly Capital One, but they seem to be asking the same question: "What's in your wallet?"

The government? They want to take something from your wallet: your money.

The government, particularly under control of Democrats, doesn't think of it as your money. They think it's the government's. And anything they don't take is their generosity to you. Like you should be saying "thank you" that they left you some of your own money.

I don't feel that way, but that's how Democrats, liberals, and other national socialists feel.

And they are empowered by people who want the government to take care of things.

As a Christian, I agree that we should help take care of one another. But it's not the government's job to enforce this. That's why I opposed the bailouts, cash for clunkers, socialized health care, and all the other things like that which the government is taking my money and your money to do.

The thought behind these things seems good on the surface: helping others. But that shows a lack of thought, an inability to understand what's going on.