Now the left wants to ban Ronald McDonald. Fear not. As soon as they discover there's a Black man under the makeup, they'll stop.

Okay, the guy beneath the Ronald McDonald makeup isn't Black. But it made you pause and think for a minute, didn't it? And what does that say about you?

Yes the SUV is parked. And a cop is 20 away, not paying attention. 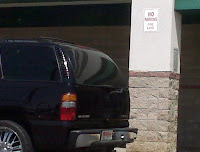 Was Marvin the Martian drafted?

Okay, maybe I shouldn't be picking on people in Columbus. But, sometimes, they make it so easy.

If Democrats get any more stupid, they will tip over and capsize.

Of course, the district that elected Hank Johnson is the same one that elected Cynthia McKinney. That explains a lot.

Yes, he's the same Hank Johnson you saw standing next to John Lewis when he lied about racial slurs.

And the same Hank Johnson that wants to free Savannah cop-killer Troy Davis.

By the way, have you bitch-slapped a socialist today?