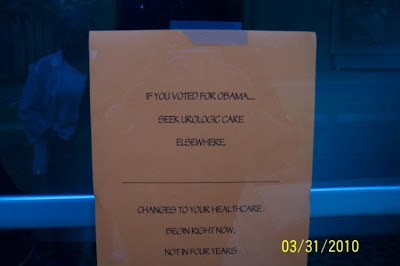 The good doctor isn't refusing to treat anyone:


"I'm not turning anybody away — that would be unethical," Dr. Jack Cassell, 56, a Mount Dora urologist and a registered Republican opposed to the health plan, told the Orlando Sentinel on Thursday. "But if they read the sign and turn the other way, so be it."

Maybe those Obama voters can get one of those people in white coats who stand behind the president during photo ops to treat them.
By Basil at 4/02/2010 07:44:00 AM

Email ThisBlogThis!Share to TwitterShare to FacebookShare to Pinterest
Labels: Obamacare