The questioners are ready... 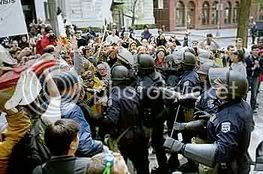 What is your typical reaction to Trolls (spewers of the liberal agenda)?

What part of the mil-blog conference are you looking most forward to?

Hugs! Lots 'n lots of hugs!
And then maybe blogging, but not before hugs!
I'm really looking forward to meeting all the Heroes and some of my wonderful readers.

Next, we have two students from overseas that want to ask some questions. The first...

I am a journalist student from Finland. I would like to interview you as my schools assignment of the danish cartoons of Mohammed.

How do you see: are the people in the islamic countries marching against the published cartoons or against something else?

From what I've learned, the people in the Islamic countries who are marching have been inflamed to do so by a small, but well orchestrated band of radicals who are using the cartoons as an excuse to cause violence. Even Iraq's Grand Ayatollah Sistani blasted the "misguided and oppressive" Muslims who have exploited the issue "to spread their poison and revive their old hatreds with new methods and mechanisms." (from National Review Feb. 27 print edition)

What did you felt when you first saw those cartoons?

I didn't understand what all the fuss was about. Plus, I don't read Dutch.

Is it approvable that media makes fun of religion in the name of the freedom of speech?

Is there something we could or should do to this situation?

There is one sure way to breed fanaticism. Cower before it, and then refuse to answer it with swift justice. Insolublog

Tell me about yourself.

Uh, ...I'm a conservative who is becoming more Libertarian as time goes on. I believe in Life, Liberty and the Persuit of Happiness through overwhelming firepower. Yes, I love our Military! Without it, the U.S. would suck. I hate hippies almost as much as jimmyb but I'm not quite as violent as fmragtops.

I'm a journalist student from Finland and I'd like to ask you a couple of questions, which are for my English assignment.

The questions are about the cartoons a Danish newspaper published last fall. The cartoons were about the Muslims' prophet called Muhammad, and he was presented for example with a bomb in his hat. Now the cartoons have aroused lots of violence and anger in the Islamic world, and even President Bush has disapproved of the decision to publish them, as they were considered insulting to the Muslims.

First of all, who are you?

Uh, ... Didn't we meet a few questions ago? You look familiar.

Do you think it was right to publish the cartoons?

I don't think it was wrong. People forget that the furor over the cartoons started months after they were published. It took a lot of PR by the radicals to get people to even think twice about them, let alone start rioting. Al Queda could have used any pretext to start the same type of outbursts. They could have started a rumor that burqas worn in Gaza were made in China!

Why did President Bush disapprove of the publishing, even though the freedom of the press is important in the US?

Because (as much as I respect the President) he can be such a putz sometimes! All politicians will lapse into purely political reactions from time to time, and Bush is no exception. I'm sure if he'd been able to respond with his head instead of his heart, he would have said that the extremists/terrorists were not acting like civilized people and were not entitled to be respected.

Should all Western countries, including the US, support Denmark?

No, we support too many of our "cousin" countries as it is! No more welfare checks - you go out and find a job now!

Oh, wait... you meant, like, emotional support? Yes, we should be behind you all the way!

Should the Danish people be afraid of terror attacks in their country?

Absolutely! No country is immune from islamofacist terrorist attacks. It doesn't matter if you stand up to the terrorists, or appease and acquiesce to their demands; they are evil and crazy and will try to strike anywhere that presents a target.

Are the cartoons going to start The Third World War?

No, that already happened.

Why did you start the Semper Gratus! blog?

Because after spending all night composing a post on Blogger, the whole damn thing disappeared. I had little time to waste and just started another blog.

I now will let it languish whilst I find a suitable host that doesn't cost all my hard earned bling and will stay up more than 98% of the time. Any suggestions?

Who would win in a fight Emma Peel or Police Woman?

What's the greatest thing you ever read?

Liberals! Well, maybe they don't frighten me as much as Commies! Definitely Commies. And Democrats (can't forget them!), but they're really the same as Commies.

What is your weapon of choice?

What's the best thing you ever wrote?

Probably an essay I wrote for a college Lit class on Kafka's Metamorphosis. I argued that Gregor's character didn't really change at all when he became a cockroach, and that the real changes occurred within the family characters. Unfortunately, I had one of those despots for a professor who graded based on content, syntax, and how well one agreed with him. Putz!

I would like to say that I enjoyed the questions and thank all who asked them!

Thank you, Gunn Nutt, for agreeing to the interview. We really appreciate it ... and we enjoyed it!