My first Biscuits game in a couple of weeks was fun. The Wife and I went to Montgomery to catch some baseball, some ballpark food, and some fireworks. We ended up with 1 of 3. But that weren't bad.

My inability to read a schedule meant we missed the fireworks by a night. We'll have to catch some later.

We missed out on the ballpark food, and we both regretted it ... and were thankful for it. We ate earlier in the day, and decided not to push it.

The one thing in the plans that went off as planned was the ballgame itself. And it was fun, especially since the Biscuits beat the Birmingham Barons (White Sox) 6-2.

As it turned out, the most impressive performance of the evening ... offensively at least ... was by Birmingham's Cory Aldridge, who had 3 of the Barons' 4 hits ... including 2 homers.

This isn't to say the Biscuits were slack at the plate. No, not at all.

The7 managed 2 runs in the 1st inning. With 1 out, LF Brooks Badeaux doubled, and moved to third on a ground out. After 3B Evan Longoria walked, putting runners on the corner, C John Jaso doubled to right, scoring Badeaux and Longoria.

Aldridge hit his first solo home run of the night in the 2nd inning, making it 2-1 Biscuits.

In the 2nd inning, with 2 outs, CF Jason Pridie singled and moved to second on a balk. Badeaux singled to center, scoring Pridie.

In the 6th, DH Patrick Breen singled, then 2B Josh Asanovich walked. Jason Pridie doubled, scoring Breen and Asanovich, and moved to third on a throw to the plate. Pride then scored on a sac fly by Badeaux, putting the Biscuits up 6-1.

Aldridge's second solo homer of the night, this one in the 7th, made it 6-2. 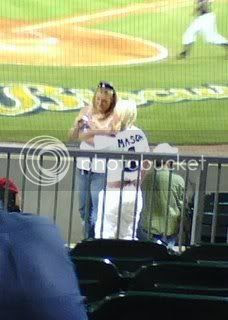 Aldridge's performance was all the more impressive when you consider that only one other Birmingham player managed a hit. Starter Chris Mason was masterful in his performance. And had a small fan club present.

A couple of blondes were showing their ... support ... for Mason. Her blonde hair is almost as white as Mason's.

He's easy to spot on the mound, just by his hair. Of course, his pitching performance is another clue to when he's on the mound. He's been a tremendous asset for the Biscuits this year. He'll be missed when he makes the jump to Triple-A, whenever that happens.

But those weren't the only one's who caught anyone's eye. 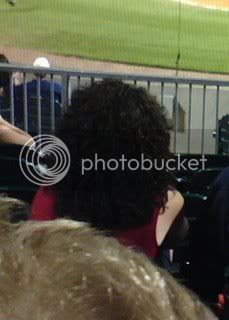 The Wife noticed a fan who came in late and had her hair done in a familiar style.

I didn't say anything, but the Wife noticed. Of course, once you saw her from the front, there was no doubt who it wasn't.

But then again, I didn't need her to turn around to know who it wasn't.

After all, the ex- doesn't go to ballgames.

There was another person at the game that I don't particularly like running into.

And he caused a delay in the game. 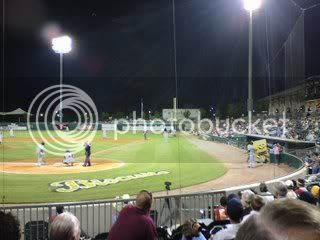 He ran out onto the field between innings, and the umpires had to delay the start of the next inning while they waited on him to be escorted from the field.

It was my nemesis ... Spongebob Squarepants.

Yes, it appears they'll let anybody into a ballgame in Montgomery.

All in all though, a fun night at the ballpark. I'm going to try to talk the Wife to going to the game this afternoon, but I suspect that's a no-go.

Anyway, the Catfish will be back in town Monday night for 8 games in 8 days.

It's good to get back into the swing of going to ballgames.