Catfish Come From Behind, Beat Rome

Down 8-2 in the 5th, the Columbus Catfish battled back, whittling away the lead the Rome Braves had, finally going ahead in the 8th and holding on to win, 9-8.

Rome scored a run the top of the 3rd on a walk and a double off starter Wade Townsend. In the bottom of the inning, the Catfish took the lead. With 2 out, CF Desmond Jennings singled to left, then moved to second when RF Maiko Loyola walked. 3B Cesar Suarez hit his team-leading 8th double of the year, scoring Jennings and Loyola, his 13th and 14th RBIs of the year.

Townsend was replaced on the mound by Chris Kelly, who got into trouble after an error allowed a run to score. With 2 outs and a runner on third, Rome 1B and former UGA standout Josh Morris reached on an error, while RF Concepcion Rodriguez scored. After 3B and former Phenix City Little League U. S. Championship team member Brandon Monk singled, CF Jordan Schafer homered off the top of the left-center field wall, scoring the 4th unearned run of the inning.

Rome expanded the lead to 8-2 with 3 runs in the top of the 5th. Three walks, a double, and two singles put 3 runs up for Rome and caused manager Jim Morrison to lift Kelly for Ryan Morse, who struck out Schafer to end the Rome inning.

Down 8-2, the Catfish fought back, beginning with a single by SS Jairo De La Rosa. Now, things are a little hazy. I was scoring the game, and I show that Maiko Loyola, with the count 1-0, singled on a ground ball to left field. However, the official scorer has reported to Minor League Baseball that Loyola walked. Either way, Loyola wound up on first, and De La Rosa on second. We agreed that Suarez walked, loading the bases. After Rome C Phillip Britton was hit -- I think, in the throat -- by a pitch in the dirt, Jerry Verastegui came in the game behind the plate. Catfish DH Nevin Ashley reached on a fielder's choice, and De La Rosa scored. LF Ryan Royster then singled, scoring Loyola, and the Catfish had narrowed the lead to 8-4.

After going down in order in the 6th, the Catfish batted around in the 7th and tied the game. Jennings tripled, then Loyola doubled, scoring Jennings. With 1 out, Loyola stole third, and Ashley walked. Royster singled, scoring Loyola. C Matt Spring doubled, scoring Ashley and Royster, tying the game and knocking Rome reliever Carlos Sencion from the game.

In the 8th, Rome threatened, getting their only hit off of Morse, a 2-out triple by Schafer. Rome SS Chad Lundahl lined out to short to end the inning, with the two teams tied at 8.

In the bottom of the inning, Jennings walked. Loyola bunted to the pitcher, who tried to throw out Jennings at second, but Jennings beat the throw. I think it's scored a sacrifice bunt, and a 1-6 fielder's choice. Jennings moved to third. I scored it a stolen base, because Verastegui didn't throw to third, when Loyola faked a steal of second. My logic is that he would have thrown to third if he could have gotten the lead runner instead of the trailing runner, since the lead runner was the go-ahead reun, but held on to the ball in order to throw to second to get the sure out. But when Loyola retreated to first, the only play was at third, and by then it was way too late to attempt that play. The official scored called it defensive indifference (I think it's officially a fielder's choice). I defer to the official scorer on this (though not on the Loyola single in the 5th). Either way, Jennings was on third, and scored on a sacrifice fly to center by Suarez.

Morse got the first two outs of the 9th. Then Neal Frontz came in and struck out the final batter.

Morse picked up his 3rd win, going 4 innings, allowing one hit, and striking out 5. Frontz picked up his 2nd save. Townsend left with the lead in the 3rd after throwing 58 pitches, striking out 2. Kelly's rough outing was the only blemish on the Catfish bullpen tonight, allowing 7 runs, but only 3 earned. He struck out 1, but walked 4 in 1-2/3 innings.

Jennings, Royster, and, in my scorebook, Loyola, had 2 hits. Suarez had 3 RBIs. Royster and Spring each had 2.

The game ran long, officially 2:46 minutes. It actually took longer, with the delay for the injury to the Rome catcher. 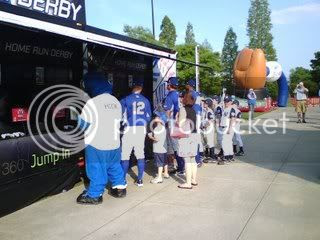 But before the game, there was fun for the kids in the area.

And for mascots, too.

I found the Catfish mascot, Hook, and several Catfish players enjoying spending some time playing a XBox 360 game. There were plenty of stations for the Little Leaguers to play, as you can see in the photo, so no, the Catfish ... nor Hook ... were preventing the youth from playing. They seemed to enjoy watching the pro ballplayers playing a virtual game.

The whole setup was part of the Principal Family Fun Fest. That makes the rounds at minor league parks all over. If they are in your area, check it out. The kids will have a good time.
By Basil at 5/02/2007 08:01:00 PM