Jumping Out Of A Perfectly Good Airplane 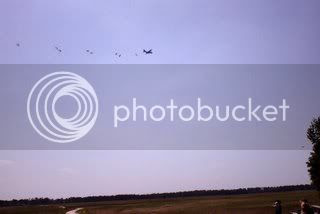 But there are others that don't mind jumping out of perfectly good airplanes.

The Little Princess is dating a soldier. A lieutenant, actually. A second lieutenant, specifically.

He's a good kid. Okay, young man. Because he's not just a kid. Sure, he's young, but most lieutenants are.

But The Lieutenant -- we went to his Infantry Basic Officer Leaders Course graduation back in November -- finished Ranger school recently. Then to Airborne training.

This afternoon, I went to watch him jump out of an airplane. He's the fifth one in the picture. If you look close, you can see him smiling and waving for the camera.

Okay, maybe you can't see him smiling and waving. But he was smiling when he ran to the bleachers at the edge of the drop zone. He was the first one back.