Why Blogging Has Been Light 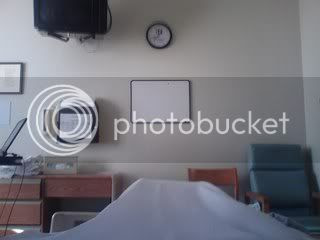 Although I have cut back on my posting here lately, I hadn't intended to cut back quite this much.

As I write this, I'm sitting in my room at St. Francis Hospital in Columbus.

Sunday, I awoke feeling ... well, not great ... but not all that bad. Some store-brand imitation Lucky Charms kind of cereal, and I was good until lunch.

Didn't feel all that great, and was unsure about going to the Catfish game Sunday afternoon. Finally decided to go, and ran through the drive-through at Wendy's.

Pulled out, and while listening to the Braves game on the radio, made a right instead of a left, and headed back to the house. Went in, finished my burger, and lay down.

That afternoon, I began to have serious problems with keeping stuff in me. (Maybe ... or maybe not ... more on this in a later post.)

This went on all night. But seemed to settle down the next morning. Didn't feel up to work though, so I called in.

But things got worse and worse. Finally called the Wife to take me to the hospital.

Late afternoon, they saw me, gave me an IV to draw blood, insert fluids and medications (morphine!! WTF?) and such. Were about to discharge me around 9:00 PM when I threw up again. So, they called the doctor. He was unavailable, so his business partner came in and saw me, and admitted me. Sat in ER until after 2:00 AM when I was finally moved to a room.

Where I am now.

The Wife was kind enough to bring me my computer this morning.

Now that I'm ... sort of ... back online, I can check and see how the Catfish and Biscuits have been doing.