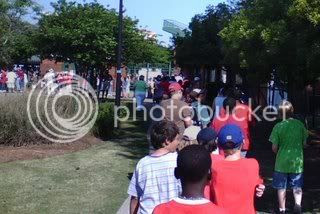 After winning the first 5 games of the year against the Rome Braves, the Columbus Catfish finally dropped one. In 13 innings, Rome beat the Catfish, 2-0.

It was "Play hooky with Hook" day ... students from several schools in the area showed up ... and I played hooky from work ... taking a vacation day ... to watch the game.

I knew to get there early. Because, when they have schools bringing students to the games, the students come in through the same entrance with everyone else. Which makes for a long line.

But, the line went smoothly, with everyone moving along just fine.

Too bad the Catfish base runners didn't have quite as easy a time.

Rome pitchers held the Catfish to 4 hits. But 5 walks and 2 errors (Rome committed a total of 4 actually) allowed the Catfish more base runners. But 2 pickoffs, a double play, and timely defense and pitching, caused the Catfish to leave 8 runners on base, 5 in scoring position.

Catfish OF/DH Desmond Jennings had his 17-game hitting streak snapped. And the Catfish 5-game winning streak against Rome was snapped as well.