After almost letting the game get away from them, the Columbus Catfish fought back, winning in the ninth inning, 6-5, over the Charleston RiverDogs (Yankees).

1B Matt Fields got the Catfish on the board first in the 2nd inning, driving in LF Ryan Royster on a single to right.

Charleston tied the game with an unearned run in the 4th. RiverDogs CF Austin Jackson walked, advanced to third on an error, and scored on a ground out by Charleston LF Seth Fortenberry.

In the 5th, the Catfish re-took the lead. SS Jairo De La Rosa singled, stole second, moved to third on a passed ball, and scored on 2B Joey Callender's sacrifice fly to center.

The 2-1 lead didn't last. Wilton Noel replaced Josh Butler on the mound for the Catfish to start the 6th, and ran into trouble right off the bat. A single and two homers put Charleston in the lead, 4-2. Another solo shot in the 7th made it 5-2.

In the 8th, P Matt Falk made his first appearance since being called back up, and set Charleston down in order, setting up the Catfish comeback.

Falk set Charleston down again in the 9th, then the offense won it in the bottom of the 9th. With 1 out, De La Rosa doubled, moved to third on a ground out, and scored when Callender singled to left, giving the Catfish a 6-5 win.

Butler pitched 5 innings, allowing 5 hits and 1 unearned run in a no-decision. Noel's blown save was his first. Falk's win was his first. He pitched 2 perfect innings in picking up the win. 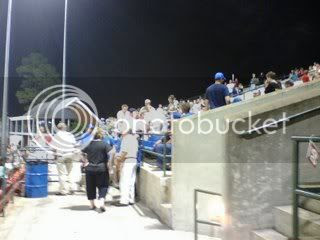 One thing that doesn't happen often, but they always talk about, came into play late in the game tonight.

You always hear the warning before the game to be on the lookout for thrown or batted balls coming into the stands. A couple of weeks ago, at a Biscuits game, a player was hurt by a batted ball.

Tonight, a fan was injured by a bat. Every so often, a batter will lose grip of the bat, and it'll fly. One flew into the stands and hit a fan tonight.

They called the ambulance, and the fan was treated and appeared to be okay.

It was scary for a bit.