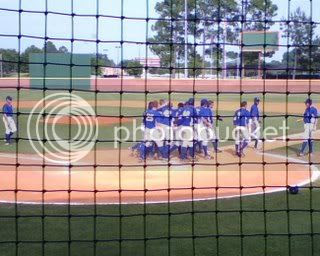 Columbus Catfish 3B Cesar Suarez belted his first home run of the season at a most opportune time. In the bottom of the 15th, after the lead runner had just been thrown out attempting to steal, Suarez sent the next pitch off the signage over the left field wall to give the Catfish a 3-2 win over the Savannah Sand Gnats. The win helped move the Catfish back into first place.

The Catfish had taken an early 1-0 lead in the 1st inning. With 1 out, RF John Matulia singled on a ground ball to third base, then stole second, and moved to third when the throw to second went into the outfield. Cesar Suarez drove Matulia home with a sacrifice fly to center field.

Savannah took the lead in the 4th on two doubles, a sacrifice bunt, a single, and a ground out RBI.

The Catfish tied the game in the 7th. With 2 out, 2B Joey Callender doubled, then scored on a single by RF Maiko Loyola, tying the game at 2. The Catfish had an opportunity to take the lead, but the inning ended with runners on the corner.

Another wasted opportunity in the 8th had runners on second and third, but the Catfish were unable to score.

In the 12th, the Catfish had the bases loaded with 1 out, but were unable to convert.

Savannah threatened in the 13th. With 1 out, SS Juan Lagares doubled to left. With 2 outs, the Catfish tried to walk DH Hector Pellot, but he managed to connect on a toss too close to the strike zone. Lagares tried to score from second, but a dead-on throw by Matulia to C Nevin Ashley nailed him for out 3.

In the top of the 14th, the Catfish benefited from Rule 6.09 (e) when a ball hit down the right field line bounced into the bullpen, causing the Savannah runner to return to third base. He would have likely scored had the ball remained in play. The Catfish got out of the jam, setting up Suarez' winning shot in the bottom of the inning.

In the 14th, Matulia singled, then was thrown out trying to steal second. On the very next pitch, Suarez hit his first homers of the year above a leaping D. J. Wabick, who just hung his head as Suarez rounded the bases.

The Catfish managed 15 hits, but stranded 14 runners on base, 9 in scoring position. Matulia was 4-for-6 with a walk and a run scored. Suarez was 3-for-6, a triple shy of the cycle, with 2 RBIs, counting his game-winning shot.

The win means the Catfish took 3 of 4 from Savannah, and remain in second place, a game behind Augusta are now tied with Augusta, who lost to Lexington tonight, for first place in the SAL South division, and a half-game ahead of Asheville, who beat Hickory tonight.