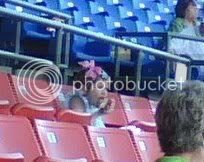 On Pirate Night -- celebrating the new Pirates of the Caribbean movie -- the Columbus Catfish scored a long-sought treasure: first place in the division.

Woods Fines pitched 6 innings of 4-hit ball, striking out 4 along the way, to lead the Catfish to a 2-0 win over the Savannah Sand Gnats (Mets).

Leadoff batter Desmond Jennings (DH) was hit by a pitch, then moved to second when John Matulia (RF) single right. Both stole a base, then Jennings scored on a ground out by Cesar Suarez (3b). With 2 outs, Quinn Stewart (LF) doubled to center, sending Matulia home.

That was it for the scoring. The Catfish managed to put runners on base in every inning, but couldn't muster another run. 10 men were stranded, 4 in scoring position.

Savannah threatened in the 2nd, putting a runner on third with 1 out, but the Fines got out of the jam. In the 5th, Savannah had runners on the corners with no one out, but an attempt to score on what looked like a sacrifice fly to center turned into a double play when CF Maiko Loyola threw a perfect throw to C Nevin Ashley, nailing Francisco Pena (C) who tried to score from third.

A Savannah 1-out triple in the 8th was wasted when reliever Brian Baker got a strike out, then coaxed a ground ball for the 3rd out.

Another threat in the 9th was squelched. A walk and 2 singles loaded the bases with 1 out, but closer Ryan Reid struck out the side, preserving the shutout and and picking up his 5th save. Fines improved to 4-2 on the season, lowering his ERA to 3.04.

The win, coupled with Asheville's 10-4 loss to Hickory and Augusta's 10-4 loss to Lexington, puts the Catfish in 1st place in the South Division of the South Atlantic League. The Catfish are 32-16 (.667), tied with Augusta for 1st place, a half game ahead of Asheville.