This weekend ... actually beginning early Friday morning ... the Wife and I took my grandmother to Nashville to the Grand Ole Opry.

Grandma turned 93 last week, and for her birthday, wanted to go to the Opry. So, the Wife and I took her to the Opry.

Friday, we headed to her house, threw her and her bags in the car, and headed north. We stopped for the night just north of Atlanta for supper and decided to call it a day. We made it into Nashville the next morning. 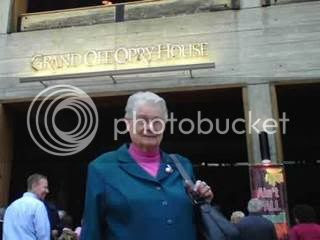 That night, we took Grandma to the Grand Ole Opry.

Grandma was surprised when the pre-show announcer, a woman playing a Minnie Pearl character, told the crowd that she was in the audience, attending the show for her 93rd birthday. She received a nice round of applause from the audience, and was just thrilled to have them mention her.

Of course, since the Grand Ole Opry features many of the older, traditional country music artists, Grandma had a good time.

Segment hosts Little Jimmy Dickens, Bill Anderson, Ricky Skaggs, and John Conlee were some she really enjoyed. The artists who performed, including the Whites, Jim Ed Brown, Jack Greene, and others. She seemed to enjoy them all, but in particular, the older stars.

Now, while I'm not a country music fan, I've listened to it all my life. And it amazed me how much the older artists I'd never seen live before, like Jim Ed Brown and Jack Greene, sounded like they did 40 years ago. The other older artists, I'd seen before. And they all sounded great. I was worried that some of the older artists might not sound that great, but that was foolish, as it turned out. 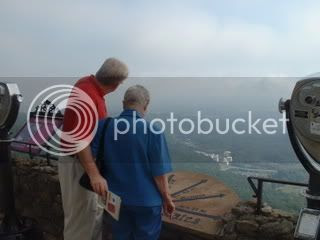 We got up early Sunday to head back, and decided to stop in Chattanooga and take Grandma to see Lookout Mountain. You see, she had mentioned that she had been there over 50 years ago. So, we took her to the top of Lookout Mountain.

Actually, we were worried about her making the walk. I mean, she's 93. But, she was game, and they've laid out an abbreviated path that includes no up/down steps. Ramps all the way. So, we went in, and went to the top of Lookout Mountain.

Grandma remembered bits of it from before, but much of it seemed new to her. But, at the top, Lover's Leap they call it, where you can see seven states, was something she remembered. Of course, it was hazy, as you can see in the picture, so she wasn't able to see the seven states. We don't think. But she was able to see a bit. And was happy.

My Big Sister (who's 5'4'') met us in Macon and took Grandma the rest of the way home. That allowed us to get home about dark. Instead of about Midnight. So, thanks Sis!

Oh, right. You want to know about the underwear, don't you? Sure you do. You freak, you.

I picked up the habit a while back of trying to pack more than I need to when travelling. Just in case, you know.

Well, Friday night, when we stopped at the hotel north of Atlanta, when we got ready for bed, the Wife made a horrible discovery. She had forgotten her nightgown.

So, here comes Basil to the rescue.

I had packed an extra undershirt and an extra pair of boxers.

So, the wife had something to wear in the hotel room we shared with Grandma.

The next morning, the Wife got dressed for the trip to Nashville, and folded her "bed clothes" and placed them back in the suitcase.

That afternoon, after we got to Nashville and rested up, I took a shower before heading to the Opry. I took my clothes ... and a clean set of underwear I took from the suitcase ... with me to the bathroom.

And we went to the Grand Ole Opry.

That night, when the Wife was getting ready for bed, she looked for her "bed clothes." And couldn't find them.

Yep. Those were the underclothes I had worn to the Opry!

And, yes, the Wife made fun of me.