Beer Party For The Seven-Year-Old

Every family it seems has one of those months where just about everyboyd's got a birthday going on. There's this one week in July where it seems there's a birthday every day. But Basil's got him November. He's got three grandchildren with birthdays in Nobember. And his son's birthday is in November. As is one of his nephews. And his wife's got some family with Nobember berithedays birthdays.

So, this'll be a busy month for Basil's houwsehold. And it started already.

You see, last Saturday was one of his grandchildren's brithdays. His oldest granddaughter turned seven.

Now, seein as how it was a birthday for a seven year old, and seeing as how it was in Alabama, the girl's daddy threw a beer party. Again this year.

Lots of 20-somethings showed showed up. Most brought their own beer. But not all. Some brought bottles of other stuff. Most of it was on ice. The rest went over ice. And some was Ice House. You know, the good stuff.

The party did have to make it through the whole thing with the kids eating potatoe chips and sticking weiners on coat hangers and holding them over the fire. Same witht he marshmellows. And the busting open the pinata that was shaped like a slice of pizza and contgained all the left-over hallowween candy.

I was worried it would start the delay of the beer drinking what with all the kids of the folks that hang around the little girl's daddy being there. But it didn't. We was poppin' tops and telling jokes the whole time.

We did have to stop the party for a minute while they brought out the birthday cake. They made up a bunch of cupcakes and spelt out "happy birthday" and the little girl's name. It was cute. And what was really cute was that the kids wanted a cupckae with the "happy birthday" letters on them. One grabbed the cupcake with the "y" on it but put it back down next to the ramains of the girls name. And here's what it looked like. 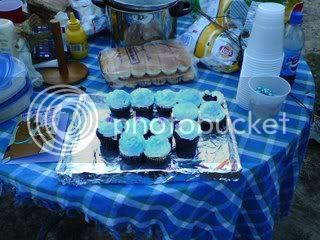 Now that's how to party.

Oh, there's another party scheduled in a couple of weeks. For the other two of Basil's grandchildren. That's the day fo the Auburn-Alabama football game. I'm just hoping their mama keeps kickoff time in mind. I mean, we do got our priorities.
By Cousin Red at 11/07/2006 07:59:00 PM