Jay from Stop the ACLU!

Last week was a blast! And we're kicking it up a notch with this weekend's interviews: we have two interviews. Today, it's Jay from Stop the ACLU! on the agenda. Tomorrow, it's Denise from Grandma's House.

Those with the questions are here ...

Let's get this party started!

What do you think would be the Ideal America if the ACLU had its way?

Ever heard of China? America as it was originally envisioned would no longer exist. An ACLU Utopia is something more reminicent of the former Soviet Union.

What do you do for a living?

E-5 in the USAF. Logistics special duty to recruiters.

How do you do your research?

I have several books about the ACLU. ACLU Vs. America by Alan Sears, The Politics of The American Civil Liberties Union by William Donahue, The Twilight of Liberty by William Donahue, just to name a few. I also get news alerts about the ACLU from google, and yahoo. Sometimes its hard. Worldnet Daily is a good resource too. When I can't find something about the ACLU I visit the opposing organizations websites like ADF, and ACLJ. I find out a lot from the ACLU's website.

Who influenced you to start a blog that alerts people to the ACLU's activities.

Ha! Bill O'Reilly? I got involved in freerepublic during the last election, and really started getting angry at the ACLU. I found http://www.stoptheaclu.org and joined its discussion forum. I'm gonna have to say that Kender's Musings inspired me to start an actual blog.

What is the worst hate-mail you have received from ACLU supporters?

I'd really have to dig through my emails to find out the worst, but I'll just say they are all the same. I don't know what it is about those that hate me, but none of them can spell very well. The most common name I get called is Nazi, most often spelled Nazzi. Of course this is only after a lot of profanity. I usually just ignore my hatemail.

What is the worst thing you've been called lately (on the site)?

Oh, the usual Nazi, fascist, and words I'd rather not repeat. I've got tough skin, so none of that bothers me.

How long did it take you to develop your writing style?

I have a writing style? I don't know, it just goes from my brain to my fingers. I just type things the way I would say them. I do a lot of copy and paste.

Question #2: Are you (Jay) surprised by the success you've had in the relatively short time frame Stop the ACLU has been around.

Very surprised. I want success so we can actually make a difference. I work hard at it, but the success so far in such a short time has been a good surprise. 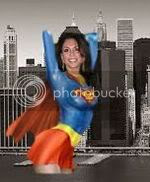 Jay, Do you really believe the ACLU can be stopped? They are past of the fifth column, a worldwide network of haters. They are but an arm of multi tenacled that includes the Democrats, a large part of the International community, NGOs. The International Solidarity Movement recruits international volunteers, mostly radical students from the United States, Canada, and Europe. They pose as agents of charitable goodwill, these radicals then interfere here and in Israel.

The ACLU's platforms are criminal and dangerous. Their policy guide states that all civil and criminal laws prohibiting polygamy should be done away with. Earlier this year, during a speech at Yale Law School, ACLU President Nadine Strossen said: "We have defended the right for individuals to engage in polygamy. We defend the freedom of choice for mature, consenting individuals."

And yet they are speaking at YALE LAW! Isn't this bigger than just the ACLU?

Huh? Sorry, I was distracted by the superhero outfit. Ummm�what a difficult question.

I'll counter that question with the question of what if they are not stopped? They can't be stopped if we don't try. I believe in the power of the people, so I definitely won't lose hope in the possibility. If nothing else, they can be countered, and slowed down.

The key to achieving the goals of our effort is awareness. If we can pursuade enough individual members that they have been hood-winked by these Communists, then maybe it will start to put a dent in the funding. the key to stopping such a well financed organization is to remove the funding. That is why the first step is to remove them from the taxpayers' dime. And extending the voice of reason to those who have been sucked into their propaganda and getting them to take an objective look at the ACLU. Starting with their history.

Yes it is bigger than just the ACLU, I'm tempted to start another blog called stop the U.N. 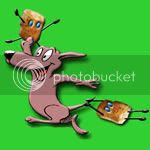 How long did it take people to notice?

The trolls noticed overnight. It was a troll magnet. John Hawkins from rightwingnews took notice early without a single email to him. When I moved from blogspot to .com things really started building. Its been a lot of work, and patience to really be noticed. I still don't feel like we are noticed enough.

Do you think all your efforts will pay off?

In the longterm, of course I hope so. Otherwise, I'd just quit. It does get frustrating sometimes. It has to. For the good of everything we hold dear, it has to. Otherwise, the USA will become the U.S.S.A. (United Soviet States of Amerika). We cannot allow ourselves to fail. The key is reaching out and getting more and more supporters, so we can all organize to do something.

Do you feel it is possible for he ACLU to become an organization that is watching our for the betterment of the American peoples.

Absolutely, right after pigs fly, the time machine is invented, and Bush fixes the border problem. The ACLU has been anti-American since its founding 85 years ago and will remain so until we rid our nation of its infestation. Reform is a beatiful hope, but not very realistic.

How much time do you spend on your site each day?

Absolutely, entirely too much.

Does this blog effect your daily life?

My job reviews are suffering, and my wife hates it.

It makes your head look fat.

How much time do you spend surfing the sphere just for the hell of it?

Not much anymore. I used to comment and try to visit every blog on my blogroll, but now my job has gotten very busy, and I'm lucky to do the research, put up my post and visit 10 to 20 other blogs.

Where do you want to live when you are 70? 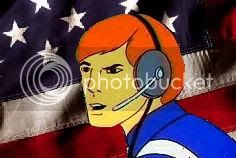 What happens when you finally stop the ACLU?

This is when I will establish a theocracy, and throw a big party. Just kidding. We existed for 144 years before they showed up, I'm sure we could have existed just fine without them for the last 85. I am equally as confident that we could exist for centuries to come without them. I probably would throw a party, and I'd have to come up with a new blog, since I'm so addicted.

Why do you do it?

Because nobody else was.

What exactly does the acronym "ACLU" mean? Is it really "Aint got no CLU"? Or is that just an urban legend? The other one I have heard is "American Communist Lawyer's Union", but that just seems silly.

no more silly than the American Civil Liberties Union. Let me explain:

American - Co-founder Roger Nash Baldwin was so entranced by the Soviet model that he visted the Soviet Union and made statements advocating a similar transformation here in the States.

Civil Liberties - BS, they are only interested in advancing the 45 goals of the Communist Party as outlined in the book The Naked Communist.

So it seems to me that the American Communist Lawyers Union is the most appropriate meaning of their acronym, although I've also heard it stands for Anti-Christian Lawyers Union.

Whenever the server crashes I panic! It happened three times in one day a few weeks ago. I think that was the worst day so far.

What is your favorite part about blogging that surprised you?

All the supporters. Without them, we would be nothing.

Can I borrow a dollar?

I was going to ask you the same thing. I will let you borrow the dollar that is left over after we get enough funds to pay for the Washington Times ad.


That concludes today's interview. Tomorrow, we have Denise from Grandma's House ready to go.