Wow! The inteviews have gone far better than I expected. Thank you.
Now, for round three. Or four. Since we do two a week, I'm losing
count. Anyway, it's the third weekend.

and the questioners are here ...

So, let's get underway!

It started out as Fins Up, which was on the back of my favorite Jimmy Buffett tour shirt many years ago. It evolved to phins up which I had on the back glass of my car my first year of college. From there it evolved to phinsup, my online nickname in college and through evolution and a Homer Simpson like level of slothness it was shortened to phin.

Why in the world would you think that North Carolina barbeque is any good?

As Chai-rista from  BBQ Blog points out: "The glorius whole hog, genuine, Eastern NC style BBQ - the One True BBQ - to which Phin refers is, indeed, Nirvana." Her words, although I do agree whole heartedly with them. 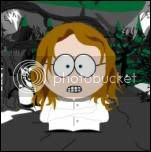 What do you really think of Harvey and the huge family he has spawned?

Harvey is a great guy, well at least online. Really how much do we really know about anybody? He could blend kittens for all we know. Not that I'm suggesting Harvey blends kittens, as I'd hate for a nasty rumor to get started. For the Bad Example fam damily family, he knows how to pick'em, or maybe it's the whole birds of a feather bit. Several of the Bad Example family are the first blogs I check and among the daily reads, they're a top notch group for the most part, you know in spite of having a kitten blending blog father. Hey don't blame me I didn't start the rumor. Next question please. 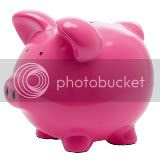 Yes I'd like to part with these questions. I mean what the hell is this the Spanish Inquisition? Hey I think I'll sing: The inquisition what a show.... Oh, you meant 2 part questions, sure, fire away.

What is something scientists need to invent?

A cure for this rash I've got would be nice. I mean no matter how much I scratch the damned thing won't go away. On a slightly less selfish note, a cure for some of the common cold would be nice. Or perhaps self heating spam, not the comment or trackback kind, the meat byproduct kind, mmmm spam.

Have you never tasted real barbeque?

Sure, see the previous question about North Carolina, specifically Eastern, Barbeque. Now if you're talking about mutton, yep I had it in Owensboro, KY. Then there's the Ribs from Three Pigs in Memphis and a couple of other places in Memphis that also smear sauce on their pig to cover up the poor cooking job. Lexington, also in NC, somehow deviated from the path of righteousness and the cover their pork in a mustardy, bile type concoctions that I wouldn't feed to the opossums that other folks grill and call barbeque. You aren't grilling opossums are you?

Where do babies come from?

From what I've heard it's a complicated process involving a shower curtain, baby oil, a nine iron and a buffalo (stuffed preferably for safety sake) or a kiddie pool and fifty gallons of chocolate pudding. Since I'm not really a fan of pudding or baby oil I'll opt for plan b and go with cloning.

Ok, from whom did you inherit your sense of humor?

I'd have to say I got lucky in that both of my parents have a pretty good sense of humor, otherwise I'd have never lived to see adulthood (ok I'd have never lived this long, I still haven't grown up). That's the genetic side of things, for the warped part of it I blame repeated beatings, being dropped on my head and a swan dive off the changing table (and people talk like all dain bramage is bad).

October 18th, 2005. It's pretty much when I learned that sleep deprivation, an idle mind, Macromedia Fireworks and my blog shouldn't be mixed. Or that time that I kicked the power cord out of the back of the interweb's server and MuNuviana went down (sorry 'bout that y'all).

And do you drink ginger ale or some other bizzarre concoction with your barbeque?

Ginger who? She was the hot chic on Gilligan's Isle right? Oh, you mean the drink 'bout the only thing to drink around here is Sweet (as in sugar added while it's still hot) Tea and Pepsi. Of course by Pepsi, I mean Pepsi, Mountain Dew, Coke, Mellow Yellow, etc...

How old were you when you started liking Michael Bolton?

Twenty-nine. Really the first time I'd ever paid any attention to him was when President Bush nominated him to regulate those wacky foreigners over at the UN. Wait, you're talking 'bout that Nancy boy that prances around on stage singing 'bout: 'til the end of forever and time, love and tenderness? Never heard of him.

If you had a license to kill, who would be first?

The next filthy spamming S.O.B. that hits my blog. Of course I may not wait for a license.

Which of the Monty Python characters or actors is your favorite?

As far as the character I quote the most it's probably the Black Knight. I'm just a big fan of Monty Python in general, for that I blame my older brother and sometimes wiser brother(Confederate Yankee).

Good Lord, have you never had real barbeque?

Ummm, probably not the stuff you'd call barbeque, but then again I'm not a fan of grilled opossum with sauce smeared all over it.

Is your humor in the real world like it is on your blog, or is that your blog persona?

I'm pretty much me where ever I go, as scary as that is. Well I don't joke around too much a funerals, but other than that yep it's all out there. Of course being as sarcastic as I am gets me into a bit of trouble with the missus. Well it used to, until she figured the best policy was to ignore me.

What's the weirdest Google search that you remember turning up in your referrer logs?

Probably Sadistic Smoking Females or indescribable burning sensation. Then there's the Vietnamese guy (I'm assuming it's a guy) that keeps googling for phin naked, I'm not sure why he's looking for images of a naked goldfish; to each his own.

Is there sugar in your tea?

Are you hitting on me? I'll have you know I'm a happily married man. Well I'm married anyhoo, and the missus keeps telling me that I'm happy. 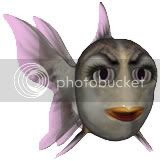 Taylor Hanson, primarily because his dangling participle isn't nearly as noticeable as Madeline Albright's. Then I could wear the "I slept with the girl in Hanson T-Shirt" and mean it.

I'm thinking this is one of those time when we learned more than we really wanted to know. Still, I hope you found this fun and informative. And habit-forming.