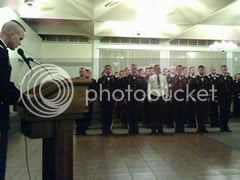 Last week, the Wife and I were honored to be invited to a graduation. My daughter, the Little Princess, was dating a cadet at the United States Military Academy. Lots simply call it West Point.

He's no longer at West Point. He graduated. And, no, that's not the graduation we went to.

Her Soldier Boy went to Ft. Benning for training. And he's just completed the Infantry Basic Officer Leaders Course. And that's the graduation to which we were invited.

We got to meet his family. Nice folks. And we all went out to eat afterwards. And it was a wonderful experience.

But the graduation was wonderful, too. We go to witness the Little Princess' little lieutenant receive his blue cord, the symbol of the Infantry.

Then, afterwards, something happened that I didn't expect. They invited all soldiers ... and former soldiers ... to participate in reciting the Soldier's Creed. And, being a former soldier, I once again had the honor to stand and recite...

I am a Warrior and a member of a team. I serve the people of the United States and live the Army Values.

I am disciplined, physically and mentally tough, trained and proficient in my warrior tasks and drills. I always maintain my arms, my equipment and myself.

I am an expert and I am a professional.

I stand ready to deploy, engage, and destroy the enemies of the United States of America in close combat.

I am a guardian of freedom and the American way of life.

While I'm no longer wearing my country's uniform, there are some fine young men ... and women ... wearing it today.

The Little Princess' soldier boy is no longer a Cadet. He's no longer in training. He's an officer in the United States Army. I'm proud to know The Lieutenant ... and to have met many of the new lieutenants that are serving and leading in today's Army.