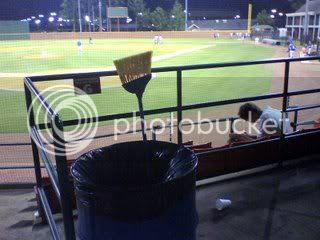 Poised for a sweep of the Charleston RiverDogs (Yankees), the Columbus Catfish were denied by excellent pitching and timely hitting. Ivan Nova held the Catfish to just 2 hits in 6 innings, leading Charleston to a 3-2 win over the Catfish.

Charleston 3B Mitchell Hilligoss singled home 2B Wilmer Pino, then scored himself on a single by CF Austin Jackson, to put Charleston up 2-0 in the 5th inning. The hit by Hilligoss extended his hitting streak to 30 games, longest current streak in pro baseball. Charleston added a run in the 7th to take a 3-0 lead.

The Catfish didn't go quietly, though. PH Maiko Loyola doubled to lead off the 8th, moved to second on a single by 2B Joey Callender, and scored when CF Desmond Jennings grounded into a double play.

In the 9th, C Nevin Ashley hit a monster blast into the tops of the trees behind the left field wall, closing the gap to 3-2. It was as close as the Catfish would get, though.

Wade Townsend allowed 2 runs on 4 hits in 5 innings work. The loss drops his record to 3-3. Ryan Morse allowed 1 run on 4 hits in 4 innings. The Catfish stranded 8 Charleston runners on base. 2 others were picked off or caught stealing. The Catfish defense also turned a pair of double plays, keeping the game in reach.

The loss was just the 4th of the year to Charleston. The Catfish hold an 8-4 edge in play against the South Carolina team this season.

Tonight, the Catfish open a series with the last-place Savannah Sand Gnats. They split 4 games in Savannah earlier this month.

The first fireworks show of the year is also tonight. And it's Pirate night. I'm not sure if I'm going to dress as a pirate for tonight's game, although fans are asked to do just that. Something about a new pirate movie coming out. Anybody heard anything about that? ):