The interview panel is ready... 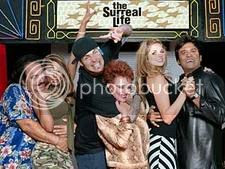 What do you think of Nicollette Larsen?

Do you think people who use balsalmic vinegar are morons?

No way. I love balsamic vinegar, and it certainly helps a girl keep her youthful figure.

Do you drink from public drinking fountains? Why or why not?

Hell no. I'm a germaphobe of the extreme variety, and that's one of the easiest ways to catch whatever cold or flu bugs that are going around. They don't exactly clean out the filters on a regular basis either.

Do you have any beauty secrets?

Lots of sleep, a vegetarian diet, and staying out of the sun.

What song are you ashamed to play air-guitar to in the privacy of your home?

I haven't played air-guitar since Def Leppard's "Pour Some Sugar On Me" was in heavy rotation on MTV.

If you had to choose, whom would you rather have for your gynecologist, Rosie O'Donnell or Woody Allen?

Oh gawd. Woody Allen would have to be the lesser of two freakish evils, since Rosie would be far too animated and attempt to converse during the examination.

Do you think Sarah Michelle Gellar will run for public office?

Not bloody likely, but I do think her marriage to Freddie Prinze Jr. will outlast the one between Reese Witherspoon and Ryan Whoszit.

Mariah's next crack-up: when & why?

I don't think she ever left her last crack-up stage. Really - The Emancipaton Of Mimi - the woman has a martyr complex or something. Otherwise, how can she rationalize being a multi-millionaire divorcee with several homes, who insists on having a red carpet laid out on the street whenever she enters a hotel? 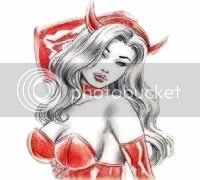 Why are you so fascinated with the humping stormtrooper?

The humping stormtrooper is the hottest thing since Elvis Presley's pelvis, and unlike Elvis, the stormtrooer has stamina.

out of the plethora of celebrities you bash regularly, which two (one man, one woman) most deserve to spend eternity staked down over an anthill and periodically kicked in the groin?.

Paris Hilton and Sean Penn. Paris thinks her body is so important that the world must worship her. Sean believes his ideological bullshit will solve the world's problems, yet he doesn't realize the reality of situations. Both of them need heavy doses of reality.

what did you do with all of your poker chips?

Ahhh. I managed to snag a variety of poker chips, including the Velociman, Feisty, and Straight White Guy chips, as well as my own. They're in my memory box, so that everytime one of you pisses me off, I can hurl them at the wall. Just kidding on that last detail...

Of course I do, you pervert. 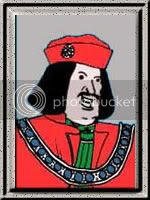 So we aren't getting as many sexy animaversion posts as we used to? Why is that? Has Tom Cruise's ubiquity in the gossip pages just depressed your libido?

It's a question of finding subject matter. Once one writes guides on oral sex as applied to both males and females, then where does one go from there? If you have any suggestions, feel free to send them my way.

What type of sidearm would a sooper seekrit agent recommend for her readers?

A good old-fashioned Buck Rogers Disintegrator Pistol XZ-38, circa 1935. Nothing else stops an opponent quite like vaporization or disintegration does, no?

Admit it! You have a thing for Llamas don't you? ADMIT IT!

Sorta kinda. Steve is the smooth ladies man, who would be good for a one-night orgle. Conversely, Robbo is the gentler one who can make a girl feel really special. 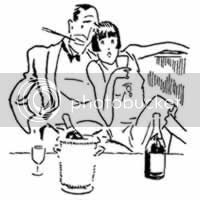 Between law, design, and writing, which one would you keep if fate demanded two are let go?

If I could possibly give up law, I would quickly do so. If forced to choose between making a living at web design and writing, I suppose I'd choose writing as a profession. Of course, we're assuming that I could actually make money at writing, which isn't bloody likely.

If millions of dollars were dropped in your lap every year for the next dozen years or so where would we find you living and what would you be doing?

I would love to keep my current home and also own a spiffy penthouse in New York City. Of course, when in New York, one must write.

Why do fat, toothless women with tattoos wear spandex in WalMart?

They commit those fashion atrocities simply because they can. Those things should be against the law.

So, if you're not Melanie, are you PittyPat? Belle Watling?

Now that I think about it, I suppose that I could resemble Melanie in some respects, except that unlike Melanie, I don't deliver stifling hugs to people that I hardly know. I do tend to be somewhat aggressive in my opinions, which does sometimes surprise people who know me in "real life." In addition, my tendency to defend friends until the very end often earns me more trouble than it's worth. That'll be the death of me one day, I do suppose.

What did you have to do to get Basil to let you guest blog?

I delivered an affirmative answer to his request.

None. Moonbats don't use lightbulbs because they're bad for the environment.

Such a loaded question...but if I must give answers:

What is baby oil made of?

If you were trapped on a deserted Island would you bring along Pete Doherty, Shakira or Rosie O'Donnell?

Yeesh. Pete Doherty, because we could pass the time getting wasted. After all, I assume we'd be at a loss for productive tasks and beyond the arm of any jurisdiction.

In a fight between Kate Moss and Tom Cruise who would scream more like a girl?

Kate Moss would totally kick Tom Cruise's ass with a series of roundhouse kicks. Tom would merely try to stop the attacks by uttering repeatedly, "Help me help you, Kate." After a substantial amount of beating, Tom would scream intolerance and discrimination towards his superior, vitamin-fueled coping mechanisms.

What is the most annoying attribute most bloggers have?

Rather than writing, so many bloggers rely on their outstanding cut-and-paste skills by filling space with blockquotes. Then they don't understand why all that hard work doesn't drive up their traffic.

If a man wanted to attract your attention would you recommend he a) cover himself in potted meat and serenade you or b) dress up like a hooker and repeatedly ask you to call him a pretty girl?

Just how many gay boyfriends do you have anyhoo?

Are you really as that phin guy and basil keep saying as cute as a button?

I've never thought of myself as "cute" in any remote sense of the word. Sooper sexy, inherently bangable, and smokily alluring, yes. Cute? You guys have got to be screwing with me.

No more than the dress you wore yesterday, dahling.

I always wanted to be a sooper seekrit agent, and "bedhead" seemed to add the requisite amount of self-depreciation to complete a proper blog name.

Again...the boots are sexy, sassy, and slightly ridiculous. It all goes with the blog's personality. 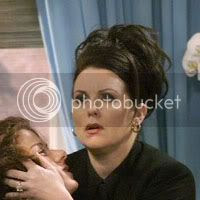 ROSARIO! Get back to work!
And give Will back to Grace and me! You've already got Jack, isn't that enough???

No way, Jose. Will is all mine.

Tell me, Miss Last Member of "Members Only," what fashion violations should be punishable by extended jail sentences?

Sagging jeans that show boxers or thongs. Jeans are meant to cover underwear, not reveal it. Oh, and I know botox is technically a medical procedure, but it's so hideous that it should be punishable by the fashion police.

I think the question on everybody's mind is, "How'd you get a A-list blogger like that Beautiful Atrocities guy to come slum with you?" My usual theory wouldn't work out, since that's something he just wouldn't do....

Nice. Do you really expect me to explain a phenomenon that I don't even understand? Perhaps it has something to do with our complimentary writing styles, but I'm just thankful that he has joined the blog as a contributor.

Which also begs the question, "Am I just not sexy enough?"

Everyone is sexy to somebody, dahling.

Okay, enough of this foolishness...lightening round!

How many times a day do you wanna just take a match to your database?

Never. I heart my database.

Um....occasionally, but I'd never torch it.

A few times per year.

Not unless they provoke me first.

Do I guest blog there (seriously, I can't keep track anymore)?

Do you have any other secret identities that we don't know about?

They all suck because they contain the same batch of losers.

Seriously, is it because I'm too fat? Is it because I need a little dental work? I CAN GET BRACES!!!! JEFF! CALL ME!!!!*

Dude, you need some serious therapy.

If you had some sharks, with frick'n laser beams on their heads, who would you sick 'em on?

Only those cretins who have been convicted of violent felonies.

Speaking of being an evil super-villain, if you had a giganto-laser, and could destroy a fairly large city to prove that the world needed to send you One Miiiiiilllion Dolllars, which would it be? Remember, after that show of force, the good guys arrive and you fall in a deep pit of oil while the leader of the super-group says, "I have a feeling that's not the last we've seen of her...."

Daphne. Everyone thinks the logical choice would be Velma, but I'm thinking that she's got several diseases due to inflated demand. Daphne really isthe underdog of the Scooby Doo gang.

How many people have you killed?

To never visit a blog and read "Welcome, Instapundit readers!" or other such nonsensical variant. That's incredibly lame, and it fails to impress most readers.

Tell the truth: Pete Doherty isn't real. You just made him up, didn't you?

Heh. Wouldn't it be cool if he was simply a figment of my imagination? Nope, I'm afraid that the KLF beat me to that little daydream.

How did you get to be so cute?

Heh. We want to thank Agent Bedhead ... who is one of the most fun people you could ever meet ... for joining us today. She's one of my favorites, to be sure.