Today, our interview is with a proud veteran of the U.S. Navy ... SeanS from Shoot A Liberal...

The interview panel is set to go ...

I know you've done it on your blog, but can you explain to everyone how you arrived at the title Shoot A Liberal?

The title of my blog is derived from two things:

1) Those signs that the Code-Pink idiots carry that say we should support our troops if they "shoot their officers". The moment I first saw that photo, my blood boiled. They would condone murder just so to advance their agenda. I would never do such a thing but I wouldn't shed a tear if they got ran over by a truck while protesting.

2) The title is also a metaphor for the subject matter of my blog. I meant 'Shoot a Liberal' to be like a 'bullet to the brain' of Liberalism.

Why does Shoot A Liberal spend so much time troll bashing when a lot of blogs just do their best to ignore trolls?

I haven't had that many trolls lately, but I do encourage their tirades. It's just fun to see some left-wing looney get his panties in a bundle trying to convince me that George W. Bush is Hitler. Not to mention, it increases my traffic.

Are you one of those conservatives that believe the Republicans need to lose at the 06 elections to teach them a lesson?

Absolutely not. I know the mind of the typical Democrat (Harry Reid is from Nevada, you know). They call George Bush the 'great divider', but if the House went to the Democrats, you would see a Washington that would be worse off than it is right now. We need to retain control of the House and then work on the issue of making the Republican party conservative again.

What made you decide to turn Shoot A Liberal into a group blog?

When Chuckles decided to get his friends together to attack my ideas, I decided that it would be right to get my closest allies together to mount a counter-assault. It has been an awesome experience.

Out of all the bloggers in the world, why did you choose those guys as your co-bloggers?

Fmragtops and Steve the Pirate both have a great sense of humor, they are not afraid of trolls, and they were easily bribed. Frankly, I'm the lucky one. 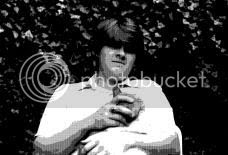 Did you have any second thoughts, before activating a blog entitled: 'Shoot A Liberal'?

Not really. I didn't realize the amount of attacks I would receive, but then I never thought I'd get more than 2 readers per day.

How much progress have you made in your uranium enrichment plan?

I still need the equipment and until we declare war on Iran, I'll just have to keep training my hamster ninjas.

"Dude, you are such a cobag." -Chuckles

Do you enjoy being called a chickenhawk, especially when you point out that you're a veteran of the United States Navy?

I saw the smoke rising from the remains of the World Trade Center Towers. I was in the Gulf when the Cole was attacked. I support our men and women in uniform because I know what they are going through. Regardless of the mission, they have a job to do and the least America can do is back them up. Call me what you will, I will always back our military and always back the flag.

What kind of ammo do you prefer to use when shooting liberals?

This one is tough. I'd have to say that it depends on the situation. For close range, I prefer Remington 110 grain semi-jacketed hollow points .357 magnum. Over 50 yards, I'd have to go with Hornady Custom .30-06 Springfield.

If you could meet one person — living or dead — and beat the total crap out of them, who would it be?

I'm normally non-violent, but I would like to see Charlton Heston take on all of Hollywood. Most of them wouldn't stand a chance. I'd help him out, of course.

The Grudge. It still gives me the creeps.

Just one? Oh, well, I'll have to say the guy piloting the aircraft that launched the attack on Abu Musab al Zarqawi. The world owes him a debt of gratitude.

If someone had one day to spend in your town, where would you recommend they go?

Name a liberal you wouldn't shoot.

Sean, it's a pleasure and an honor to have you with us today. Thank you for taking the time to do this for us. We enjoyed it.