Rain forced a postpondment in yesterday's game between the Columbus Catfish and the Greensboro Grasshoppers (Marlins). The good news is ... doubleheader tonight!

It's our last chance this season to see Dan Batz, the Grasshoppers utility OF/1B that was with the Catfish last year. He was one of two players the Wife and I hosted ... and the Catfish fans voted Dan the team's "Unsung Hero" for his quiet, yet consistent play at first base in 2005. It's been great seeing him. Since he's not the regular starter, we may not get to see him in action tonight.

Couple of notes from recent games. I haven't had the chance to mention much, with my schedule this weekend tying me up most of the time.

On Friday night, we got a look at why we love the Catfish. In the ninth inning, Greensboro's Matthew Kutler drove a ball to deep left. Adam ran and caught it against the wall ... crashing into the bricks ... then collapsing on the field. A hush fell over the crowd as time was called and several Catfish players, along Columbus and Greensboro trainers, rushed to left field.

After a few uneasy moments, Adam got to his feet, to the applause and cheers of players and fans, Catfish and Greensboro alike.

He stayed in the game, occasionally removing his hat and rubbing his head.

Such heart was appreciated by the fans. 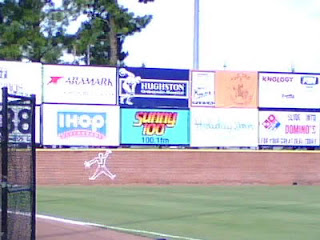 The next night, someone had a little reminder of the incident. Using what looked like sports tape, someone had placed an outline of a player against the wall ... bearing the number "3" -- Adam's number.

Play like Adam Godwin's play ... and like so many of the other Catfish players ... is why I'm a fan of the team. Sure, I'd be supporting whatever team is here because I like baseball and this is the local team. But it's the heart and determination of players like that young man from Enterprise, Alabama that reinforce the support of many ... and attract others to the game and to the team.
James McDonald, P

MinorLeagueBaseball.com has recognized the Catfish pitcher as one of the players "who's hot" in the South Atlantic League.

They've also taken note of Catfish 1B Jason Mooneyham who has reached base safely in every game in which he's appeared for the Catfish this season.


1B Jason Mooneyham's streak of reaching base safely is up to 45 games.