Georgia is a pretty special and wonderful place to live. We have mountains and seashores, wide open spaces and Atlanta. If you live in Georgia, you sometimes hear the term "The Two Georgias." That's referring to Atlanta and then the rest of Georgia. I live in "the rest of Georgia." Rural South Georgia to be precise.

Agriculture is pretty important here. If you go out for a Sunday drive, you'll see cows, goats, chicken houses, and lots of immigrants working in the fields. You'll have to watch the roads carefully, though, because you have to share the roads with large trucks such as the ones hauling logs or wood chips to the mills. Early in the morning, you're likely to see a truck hauling live chickens to Stillmore or Claxton. If you don't live in a rural area, you don't know about the chicken trucks; they transport lots and lots of white feathered chickens to the poultry plant where they will be "made ready" to sell at your local grocery store.

A few months back during late summer, my mother-in-law and her neighbor had struck up a morning conversation when they went to the mail box to retrieve the Savannah Morning News to read while sipping a morning cup of coffee. As they were talking, a Claxton Poultry truck roared past and lost a chicken. It fell off the truck right smack dab in the middle of the road in front of my mother-in-law and her neighbor.

Well, my mother-in-law has a soft spot for animals... even the ones that are supposed to end up on your Sunday dinner plate... so she raced out into the highway to rescue the dazed chicken before it got run over. The neighbor (who is from Canada and has only been in the US for about a year) had never before seen a live chicken, so needless to say she became quite animated over the whole thing.

The two ladies decided they needed to see if the chicken was ok, so my MIL took the chicken inside and checked her out. She seemed to be only dazed and a little scared to be out of a pen, so my MIL put her in a laundry basket. There the chicken stayed for the rest of the day and the night...only she was banished to the storehouse so she wouldn't stink up the house.

Over the next few days and weeks, the neighbor visited and became quite attached to the chicken, so she took it home with her and made it her pet. The chicken's name is Lulu. Lulu eats the cat food that's left out on the back stoop, and she really loves birdseed. She'll come up to you and make those "brrrrrraaaaawwwwwk' chicken noises, poop, and wait to be petted. I haven't petted Lulu yet. There was talk of bringing Lulu to my house for Christmas...as a pet...not as supper. I said noooooo.

Lulu was headed to the poultry plant to become someone's main course. Most chickens I buy to fix for supper are around 2 or 3 pounds. The neighbor's been taking exceptionally good care of Lulu since the summer. Lulu is headed on towards 15 pounds now. I told my neighbor about Lulu. My neighbor had a pet chicken...it lived to be 13 years old. It makes me wonder how big Lulu is going to get.

I sometimes wish I lived near Atlanta so I could go to the theatre and museums and such, but if I lived there, I don't think my life would be near as exciting...or at least not near as unique..as living in south Georgia where neighbors have pet chickens. 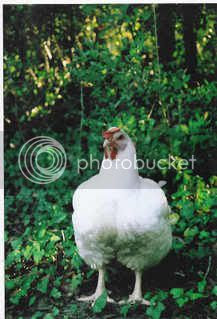 Email ThisBlogThis!Share to TwitterShare to FacebookShare to Pinterest
Labels: Guest Blogging, The Big Sister (who's 5'4'')