Did you ever play paper football at school?

You know, you'd take a sheet of notebook paper, fold it length-ways twice, then start in the corner, folding the corner up, then repeating the fold over and over until you had just a little piece to tuck in. Then you'd have your paper football.

We used to do that in school.

The slanted desks we had were all we had, sometimes. They were difficult, because the person playing "downhill" had to worry about hitting it too hard and the ball falling off. The person playing "uphill" needed to ensure he didn't spin the football too much, or it would slide back down.

The flat tables in the library were the best. When the librarian let us play, that is.

Oh, and some classrooms had flat tables or desks. And those were great for playing football.

Different rules could be applied. For example, with some, if you hit the football off the end of the table, your opponent could attempt a field goal. Others allowed field goals only if you didn't get the ball past mid-field. Some allowed two-point conversions. Others didn't. Some had goalposts that were index finger to index finger with thumbs as uprights. Others had thumb to thumb with index fingers as uprights. Little variations here and there.

Some (including me) got together and set up a league so everyone played under the same rules. They set up schedules so everyone played everyone. And then had playoffs. I never was one of the great players. I was okay, but not as good as others.

I was good at the field goals, though. I could hit the longest and straightest. I was the first to hit the ball out the top window from three rows away. Such an accomplishment, right?

Playing paper football was fun. But it's something that you don't really do once you're all grown up.

Well, it used to be that way. 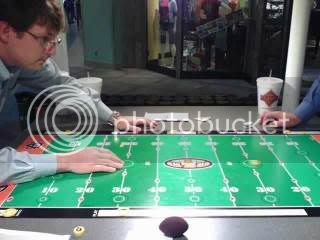 You see, there's a local group of folks ... grown men, actually ... that are involved with a company that developed a Finger Football game. And no, I'm not one of them.

Zelosport is the name of the company, and some local fellows have a hit on their hands. They have licensed all 32 NFL teams, and so far, 3 college teams (Georgia, Auburn, and Alabama) with more coming.

Some men never grow up.

Email ThisBlogThis!Share to TwitterShare to FacebookShare to Pinterest
Labels: Memories