Numbers don't lie, but number-crunchers do 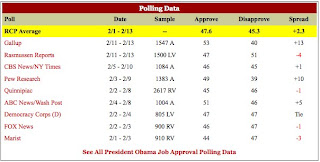 Source: RealClearPolitics
The Rasmussen Poll shows Obama's approval-disapproval rates at 47-51, a difference of -4.

The Gallup Poll shows Obama's approval-disapproval rates at 53-40, a difference of +13.

Now, does this mean that either Gallup or Rasmussen are a bunch of liars? No. Well, maybe.

How do you explain this? Or, I guess I should ask, how do I explain this? (I mean, this is my blog, not yours. If you want to offer your explanation, you can use the comments, unless you're a troll or otherwise can't follow the comment policy.)

The Gallup poll is of all Americans, while the Rasmussen poll is of likely voters.