4 inches of Global Warming ... and not much other news 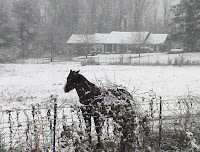 Dear Mother Nature: If I wanted to live in snow, I'd have half my brain removed, move up north, and vote Democrat. Of course, a lot of people up north had better weather than we did yesterday. We got over three inches of snow.

For example, Boise is having a warm winter. So now, they have Georgia weather and Kentucky grass. And, though there wasn't snow in Boise, elsewhere in Idaho, there was some snow. In fact, snow was on the ground in every state but one: Hawaii. Though, there has been some this winter.

You know, if Al Gore was smart, he'd declare victory over Global Warming and start up a new scam.

Yesterday morning, when the snow started, it looked like a snow globe out there. And I was hoping that maybe it was, and that Obama is simply a bad Tommy Westphall dream.

A little over two hours after the snow started in Columbus -- it started at 9:54, not 10:30 as the paper reported -- I ventured out in the Georgia "snow." I thought, "Hell, that ain't snow. It's frozen water." Then, by the time lunch was over, it was snow. And it was starting to stick. 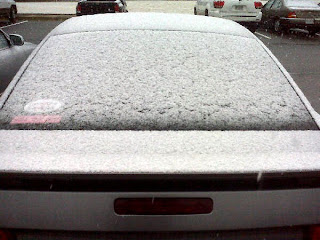 And, though I grumbled when I spent over $600 for a new set of Michelins last month, I'm now glad I did. I did need new tires, and driving in this ice/snow is dangerous! Of course, a new set of tires on my car won't help some dumbass running into me. But, thankfully, that didn't happen. And there weren't a lot of accidents reported.

I'm not sure how many people took the day off. The bank where I, um, bank, let out early. I was so jealous. Then, the place where I work let many go home (including me) shortly after. So that proves jealousy works!

Of course, all of you that live and work in snow on a regular basis are just shaking your heads at how snow affects us. Don't do that. We'll send you a hurricane, some tornadoes, and giant mosquitoes. You'd freak.

Still, snow is rare here. The first snow I remember was in 1973. I lived in southeast Georgia then. But snow was rare enough for us that I could recite the dates it snowed. And, maybe the time, too, if I thought about it. But still, snow is no way to mark Georgia Day. Betcha didn't know yesterday was Georgia Day, did you? Georgia was chartered June 9, 1732 (NS), and settled (at Savannah) February 12, 1733 (NS).

But, other than the rare Georgia and Alabama snow, what else was going on?

Well, on teh Twitter, some were tweeting about "Presidents Day" weekend. There is no such thing. Do your research. Or be a dumbass.

Someone who doesn't follow me game me a FollowFriday (actually, it was #FF) recommendation. Perhaps they'll take their recommendation to heart. Or not.

I read where Christian Bale rented a house with a body in the backyard. You have to pay extra for features like that. But he can afford it.