Our first road trip of the 2007 baseball season wasn't to a Columbus Catfish game ... but to a Montgomery Biscuits game. In Chattanooga.

Despite the threat ... and fulfilled promise ... of rain, the game went on. But, just to make a miserable, rainy night complete, the Biscuits lost the game late, allowing the home team, the Chattanooga Lookouts (Reds), to pick up a 4-3 win.

The Biscuits got on the board first, in the 2nd inning. RF Shaun Cumberland singled to right, then stole second. C John Jaso hit one through the gap in right, scoring Cumberland. The inning ended, though, after Jaso was picked off first by Chattanooga C Ryan Hanigan.

Montgomery picked up another run in the 4th inning, when 3B Evan Longoria hit a solo shot over left-center to start the inning.

Chattanooga tied the game in the bottom of the 4th when LF Cody Strait hit a 2-run shot off the scoreboard in left.

The Biscuits got out of a jam in the 6th, when Chattanooga loaded the bases with two outs, on a walk and a single allowed by SP Christopher Mason, then another walk by reliever Brian Henderson. But reliever Evan Meek came in and struck out Chattanooga SS Caonabo Cosme looking. 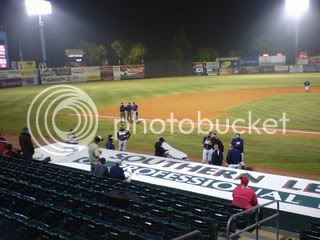 A scare in the top of the 8th delayed the game for 20 minutes when a foul ball hit into the Biscuits dugout by CF Fernando Perez struck a Biscuits player. EMTs were called, and things looked bad for a bit. However, the injured player did walk to the stretcher that was called, and left the field to applause. They didn't announce the player that was injured, and I couldn't see clearly, so I don't know who was hurt. The EMTs appears to be checking his left arm or shoulder before carting him off.

The game was halted for about 20 minutes when a foul ball off the bat of Fernando Perez hit pitcher Meek in the Montgomery dugout. He was wheeled off the field and taken to the hospital for further observation.

David Paschall of the Chattanooga Times Free-Press confirms Meek is the injured player.]

The less-important game continued, and Chattanooga put up two runs in the bottom of the 8th, thanks to 3 doubles to center, to that hit off the wall, and one that landed just short of a diving Perez.

Down 4-2 going into the 9th, the Biscuits got one run back, when 1B Chris Nowak walked, and moved to second when Cumberland was hit by the next pitch. Nowak moved to third on DH Gabriel Martinez flies ball to left, and scored on PH Josh Arhart's sacrifice fly to right field. But that was all the Biscuits could managed, and ended up on the short end of a 4-3 score.