The Wife and I went to Chattanooga this past weekend. And had a good time. And a miserable time.

It was a long drive. And it rained all day Saturday. Still, they got the game in. But the Biscuits lost.

But that wasn't the worst of it.

You see, I thought the Wife was a little subdued on the way up. I figured it was something I had done or said. Yes, I had done and said something. You know, just being an ass like husbands are wont to do.

But, no, it wasn't me. Turns out the Wife was coming down with a cold. Which is why she was carrying NyQuil and DayCare in her purse.

And she sat in the rain. Well, sort of. The rain stopped before the game. And when it started back, we moved to covered seating.

Then, it was cold Sunday. Really cold. Of course, we were in Chattanooga. Which has the Albert Gore Highway nearby. So, Sen. Gore's son's global warming kicked in, and it froze. Or seemed like freezing.

And we sat in the stands, under a blanket, trying to keep warm.

The Biscuits won, which was nice.

But we did go to Krystal. You see, Krystal headquarters is in Chattanooga. And, it's the second oldest fast-food chain in the U.S. White Castle is older.

And, when I went to Columbus, Ohio a few years ago, I ate at White Castle. Since its headquarters is there.

So, going to Chattanooga means eating at Krystal, right? Well, it did.

I wanted to go up to the big, tall building downtown, pull into the parking garage, and ask for a dozen Krystals, just to see the look on the guard's face. But the Wife said no. Besides, he's probably had that happen before. But by folks a lot younger. And less sober. And named Harold and Kumar. 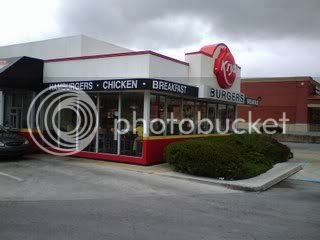 Anyway, we drove to a Krystal on the south side of town. And ordered a dozen Krystals.

We tried not to wake up the employee that was sleeping in the back of the restaurant. You can click here to see her sleeping.

And, no, we didn't wake her. But Pancho did.

Actually, I don't think "Pancho" was his real name. But that's what the Chattanooga Police called him when they came to take him away.

But he had already left, after "f*** this" and "f*** that" and "n***** this" and "n***** that" and so on. He claimed to be an Indian, although no one asked. And he said lots more, before digging into the trash can and got out a cup so he could fix himself a cup of coffee. He left before the police arrived, yelling at all the folks who were coming into the restaurant, picking up rocks and threatening to throw them, before heading off to the Eckerd's next door.

I hope he got his medications refilled while he was there.

The Wife was a little scared of him, and was barely able to eat 3 Krystals before we left.

But, no worries. We finished off the rest of the Krystals after we headed home after the ballgame.

Overall, not a bad trip. But not the best. Weather, colds (sniffles, etc), and crazy homeless people in the Krystal can put a damper on a trip.

I have nothing but good words to say, however, about the grounds crew in Chattanooga, getting the field ready for the game.

Oh, and one word of caution, if you make a road trip to Chattanooga.