My friend Denise, the clogger, competed in Miss Georgia State Clogger Pageant weekend before last. I mentioned she was going, but never did follow up with the results.

Well, the results were something to be proud of. She came in second overall, and won the talent competition.

We're proud of our friend Denise. 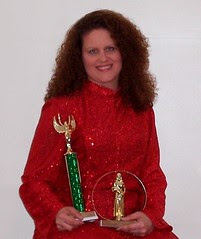 Chattahoochee Valley Cloggers of Columbus is pleased to announce that Denise Powers participated in the First Annual Miss Georgia State Clogger Pageant . Denise won First Runner-Up to Adult Miss Georgia State Clogger and won the talent award for the Adult age division. The Georgia State Cloggers Association (GCLA) sponsored the annual pageant in the beautiful historical Opera House of Hawkinsville, GA. Contestants from six age groups competed in solo clogging routine, verbal presentation and evening gown categories. Powers was sponsored by her husband Stephen Powers. She competed with a self-choreographed clogging solo to Nothin' to Lose by Josh Gracin. In her verbal presentation she talked about what she has learned since becoming a clogging instructor. Her beautiful even gown was handmade by her mother-in-law Ruth Ann Powers.

Denise began her clogging career in 1990 with the Seaview Cloggers of Ventura, CA and the Conejo Valley Cloggers of Thousand Oaks, CA. She was a member of the Conejo Valley Cloggers Exhibition Team and was actively involved in performing, choreographing dances, designing costumes, and conducting rehearsals. Denise currently teaches clogging in the Columbus and Phenix City communities and is a clogging instructor for Melissa & Co/DanceEffects and The Family Theatre- Expressions, both of Columbus. In addition to clogging instruction she also conducts private lessons, choreographs dances for performances and competitions, and teaches at clogging workshops throughout the country. She dances with the Chattahoochee Valley Cloggers of Columbus.

Denise received a Certificate of Education from the National Clogging Organization in November of 2004 and is in the process of obtaining her National Certified Clogging Instructor designation. Denise is a member of the Georgia Clogging Leaders Association (GCLA) and the National Clogging Organization (C.L.O.G., Inc). She holds a bachelors degree in Business Administration from the University of Laverne in Pomona, CA. She is married to Stephen Powers of Phenix City and is the daughter-in-law of Ruth Ann and Lamar Powers of Phenix City.