This weekend, we've got two more great interviews lined up. Today, it's Adam Gurri from Sophistpundit...

Our interview panel is set... 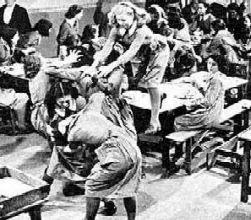 And now our first question...

I don't know if I had a worst day as much as I've had a few really bad weeks here and there, where everything I put up seemed cheap and superficial.

American Gods by Neil Gaiman--though I actually thought that his graphic novel series, The Sandman, was even better.

Gaiman is, in my opinion, the best living fiction writer. Though his stuff can have a bit of the dark edge to it, they characters are always sympathetic--something that's important to me--and they always do the right thing in the end, no matter how difficult that might be.

Collatoral. Great writing, great acting, great everything. Not a remake, and the good guy is actually a good guy (you might notice that this is something of an obsession of mine). Has been described as taking the Hitchcock "ordinary people in extraordinary circumstances" formula to an extreme.

I would say Serenity, but at this point it would just make more sense to get Firefly beforehand. And yes, I am a Firefly nut (we prefer the term "Browncoat")

Robertson, just because I recently found comedy in some statements he made.

What is your favorite nude statue?

What is the most profound thing anyone ever said to you?

The first thing that comes to mind has a bit of a story behind it. I was in Connecticut with my family one year, and there had just been a draught. We saw some trout attempting to jump upstream, except there was no water upstream for them to get there, so they were just clustering together and jumping to nowhere.

I said to my father, "Wouldn't it make more sense for them to just spawn where they are right now?"

To which my dad replied in characteristic fashion, "It isn't about what makes the most sense. It's about what has always worked."

Took me a while to get my head around that one.

There's also my grandfather, who always said "Everything is luck. And the first, and most important luck, is who your parents are."

How much cash do you have in your wallet, right this second? What are the denominations?

Zilch. In denominations of nada and--oh, here's a receipt. I have a total of $receipt.

It's the popular theory.

Prince Valient? Or Hagar the Horrible?

Hagar all the way. Just the right combination of pillaging and marital spats.

Use "protagoras" in a sentence.

Protagoras was the Sophist of ancient Greece--the first and greatest of the lot. So obviously, when naming my blog, I was half stealing from Reynolds, and half from one of the greatest minds of all time. The origin of my blog's name hasn't compensated for the content quite as much as I'd hoped that it would :D

What person you never met has had the most influence on your life?

Fellow named Karl Popper. Gave me a fresh perspective on just about every subject, and instilled in me a near obsession with making a concerted effort towards intellectual humility. A difficult task when you're born with an ego like mine.

Even where I have ended up disagreeing with Popper, it's the questions that he posed that helped me figure things out for myself.

It's in the back of my car, along with Elvis.

Neslie's Quick! Duh. What do you take me for?

In a fight between Ann Coulter and Michael Moore, who would win? And who would be rooting for?

What is the greatest civilization/society of all time, excluding the present?

Greatest civilization of all time? I'd probably go with Ancient Athens. They gave us so much of what we consider to be Western Civilization, and they were just an interesting society, t'boot.

Stan? Or Kyle?
Stan. Kyle has too much sand in his vagina.
Thanks, Adam, for being a great sport and answering these questions. And for sharing some serious stuff with the fun stuff. We all learned something.