This weekend, we continue out Blogger Interviews with another favorite of mine, The Florida Masochist ... 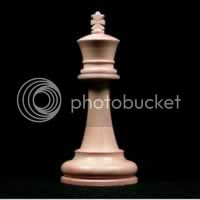 In early August I was feeling very sick. My wife was at her sister's and I could barely do anything. I didn't know yet but I had suffered a pulmonary embolism that have me in the hospital for 10 days.

There are also some days when I read these ridiculous knucklehead stories that want to make you scream. Particularly when it involves children. Any one who mistreats children just pisses me off and I want to scream.

The day I posted this.

I was gloating for a couple of days after this. For almost no one in our local media was and is still covering that story.

How did you come up with that name?

It goes back to Navy Basic Training I went through in Orlando Florida in 1979. Another recruit thought a Petty Officer was a sadist and another recruit quipped that made us all masochists. I didn't know the meaning of the word but looked it up first chance I could. It has stuck with me ever since.

Why did you start blogging?

The first blog I ever read was Michelle Malkin. We watch Fox news all the time and she's a Filipina like my wife. So I checked out her website in the summer of 2004 and began regularly visiting it. A few other blogs caught my attention, Captain's Quarters most prominently.

In late 2004/ early 05 I began giving serious thought to doing my own blog. I am not the most articulate person, so I didn't really plan on doing a serious blog but a chess one. That I began in Feb 2005 but not long after starting I found myself blogging about non-chess issues as much as chess. So in late May 05 I started TFM. The first post was a Knucklehead award of course.

This is a tough one. I'm a movie buff and love anything from the Marx brothers to Japanese Monster movies(for their camp value).

Some favorites- Breaking Away, Stand and Deliver, Searching for Bobby Fischer, The Godfather, Forest Gump, A Night at the Opera, The Stunt Man, Goldfinger, ...

Chess of course. I'm only playing 122 games by email or snail mail right at the moment. Plus I have 60 more games on order for 2006.

What's the funniest thing you ever read?

I don't read much literature that would make one laugh. My reading tastes consist mostly of non-fiction.

One book does stand out. So you're going to be a Dad This book is side splittingly funny. So much so I used to drive my wife to distraction sometimes when I read it while she was pregnant with our son Daniel.

I can't remember much of the book's humor now. There's a reason that I explain below. Unfortunately I don't have the book anymore, I gave it to the hospital where Daniel was born.

Who would you most like to be the Florida Sadist?

LOL the Palm Beach Post editorial board if they were able to enact many of their ideas into practice. Make them County commissioners or Governor for a day. God help us all.

Do any of your family members qualify for Knucklehead awards?

Yours truly. Like the day I went to watch the Women's golf here in West Palm Beach. I went to the tournament one day without wearing any sunscreen. Big no-no considering my malignant melanoma history.

Another one goes to me for after my wife's water broke when she was pregnant with my son Daniel. I regret to this day almost 3 days later I didn't insist on the dr delivering our son right away. The doctors waited and 11 days later Daniel was born. He lived 14.5 hours.

I left the hospital too that night. When I departed no one was concerned for my son but my wife called in the middle of the night to say Daniel wasn't doing well. I was so exhausted I fell back to sleep. When I did get back to the hospital it was only minutes before my son died.

So I'm my own knucklehead.

Do you consider blogging a hobby or therapy?

Definitely a hobby. I vent at my blog sometimes but TFM's true purpose is really to amuse myself. Or is that punish myself with dumb thing I write and then look back at them a week later. LOL I'm a masochist.

Definitely not the Gators. I'm about 50-50 Miami and FSU but if I lean one way or other it's to Miami.

I'm ugly and overweight by my own admission(Dear wife will argue with the first). So I'm kind of shy. I did lose 40 lbs due to my recent August hospital stay. It could be worse.

There's a photo of me when I was five with a roll of toilet tissue. That photo is MIA(and I'm not looking for it either!) 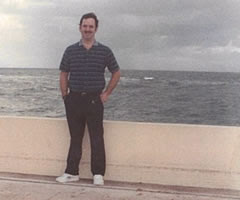 Neither. A Filipina on a polish pony. Like below. 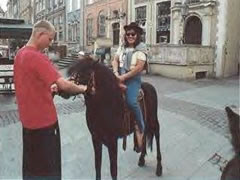 Dear wife when we visited Gdansk Poland in 2001. The video I took of this moment is hysterical. DW(shorthand for Dear wife) is laughing her head off and a marching band is going by. After that, Alina Cho of CNN, Jill Hennesy of Crossing Jordan and Soo Yun Kang, South Korean LPGA golfer.

If Jimmy Buffet's fans are Parrotheads, what are your fans called?

What do you do in "real life?"

I haven't worked full-time in 7 years. Partly health problems(Cancer, circulation problems, a recent pulmonary embolism) and part my father left me and the wife a yearly income after he died. I do tax work during the winter-time.

I write scifi/magic stories on the internet also. Twenty-four of them in all. They aren't professional quality, I'm better at concocting story ideas than putting them to words.

One of my two best and favorite stories revolves around a little girl chess prodigy appropriately enough. She just isn't who she appears to be.

Dear Wife and I lost both our children, so we live by ourselves or with DW's mother when she is not in the Philippines.

At his height, Bobby Fischer. For length and breath of his career, Gary Kasparov. The greatest chess geniuses like Fischer, Paul Morphy, David Bronstein, M. Tal all burned out young.

Thanks for particpating and making it another great interview. We learned a lot.