You know, folks pick on us White Trash from time to time. We ain't the smartest folk in the world. We know it. But we sure has fun getting on each other about things. It's a joke, but there's a lot of truth about a redneck's last words being "Hey, y'all! Watch this!"

We sometimes do stupid stuff. We sometimes get drunk and hurt folks. But, most of the time, we don't mean nothing by it. That don't make it okay. But we understand.

And, lots of places don't like to see us coming. Sure, we're welcome at the Wal-mart and Sam's Club and places like that. Target gets a little uppity, but they're just a Wal-mart painted red.

There's folks that even we won't hang around, folks we're a heaps lot better than: 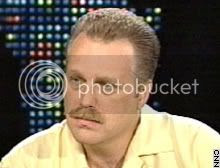