Since Basil done gone and made the changeover to this PressWord kinda blog thing, I hadn't been able to get in, so I ain't been able to tell you 'bout what's been goin' on. But I figured out how to get my password sent to me, since it had changed and all, and now I'm back.

Anyway, I been trying to figure out what all to tell y'all about, when Basil went and invited me to see one of his grandson's football games.

First off, he give me directions to the football field. He had to work that day, you see, but the game was about suppertime, so I headed over that way and sure enough found the place.

I wasn't sure at first that I was in the right place, but when I saw this tag on a truck, I knew I was at a football game: 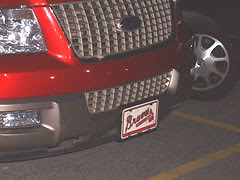 But, since Basil's grandson was playing, that meant that folks from all over was coming to watch, I figured, after seeing this tag: 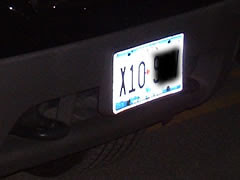 Yep, that's a Texas tag. Basil made me blur out the numbers so they don't sue him or something, but that's sure enough a Texas tag.

If that hadn't convinced me I was at a football game in Alabama, I saw this sign at the entrance: 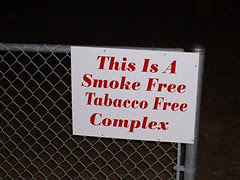 Don't be thinking I'm making this up. I ain't.

Anyway, that pretty much convinced me that I was indeed at a football game in Alabama. But if there was any doubt, I got a good look at the crowd. Now this picture might be hard to make out, but give it a shot: 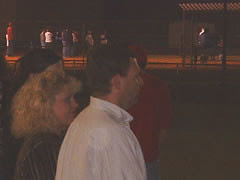 Yep, I had gone to Alabama to watch a football game.

Kinda ticked me off though, when I found out that his grandson's game was cancelled because they had a tournament going on. So, another week of football turning out not the way I wanted.

After following the Bulldogs down to Jacksonville and them getting beat by the Florida Gators, then back in Athens them losing to Auburn, then the Falcons getting whipped on TV, I thought a kids game would turn out good.