Time again for another weekend of Blog Interviews. And this weekend we have some great ones lined up. Today, it's Steel, from The Steel Deal...

The questioners are ready ... 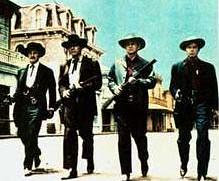 So let's do this thing!

My worst day blogging lasted 5 weeks. Typepad was so screwed up, I would sometimes spend over an hour to get a single post to ... post. It's all better now.

The best day was meeting the most wonderful woman I've ever met in my life.

How do you feel about being from the same state as Harry Reid?

I don't really consider Nevada my home. I loathe gambling. 'Pinkie'? I hear he was a weenie who got beat up in school a lot. He's STILL a weenie.

Steel's posts consistently take the main point of an article and shine a light on an alternate conclusion--often a conclusion the cited writer never intended--yet Steel's tone is almost always non-combative. Does this carry-over from Steel's philosophy of life?

I am fairly non-combative, UNLESS it's something I feel strongly about, like racism, stupidity or France.

If so, what does Steel value more, the search for an alternative perspective, or stating his view in a non-combative manner?

The little blemishes on the butt of humanity say more about us than all the air-brushed images and spun words. Those are the things I like to post

Then where does it come from?

Too much violence in my childhood I suppose. Plus, I learned a long time ago that being confrontational doesn't usually solve much.

If you could own just one book, what would be thar book? Please elaborate.

This question has apocalyptic overtones. So I'd take the best overall medical reference I could find. That said, if it was just for reading, I'd take the Oxford English Dictionary. If it was for preservation of human knowledge, I'd take Smoley's Mathematical Tables.

Recommend a Las Vegas show. And, if your top recommendation isn't family-safe, recommend one for the family.

Why did you piss off the Commisar Politburo?

Do you think we can vote to have Harry Reid deported?

To where? New Jersey or France?

The last network show I watched was 'All in the Family'. Television is a source of facts and learning for me. That's ENTERTAINMENT!

Friends? Or Everybody Loves Raymond?

You guys watch a lot of TV huh? See my previous answer and KILL YOUR TELEVISION.

What's the scariest thing that's ever happened to you?

I pulled up to an intersection just after a horrible crash. There were 30 or so people standing in big circle surrounding a mangled car that was on fire in the engine compartment and gas was running out of the ruptured tank in the rear. It was a T-bone crash on the driver's side and she was screaming for somebody to get her out because her door was jammed. It scared me because all those people were just 'watching' a woman getting ready to be burned alive and doing nothing.

What's the greatest Country Music song of all time?

I ain't much of a fan, but I've always been partial to 'Drop Kick Me Jesus Through the Goalposts of Life' OR 'Get Your Biscuits in the Oven and Your Buns into Bed'. Seriously though, 'Crazy' has all the elements for being the 'greatest'.

Then what is that the greatest song of all time?

The music I like is rock and roll and I think the 'greatest song of all time' would be 'Sympathy of the Devil' by the Stones. It rocks, has a killer riff and makes a huge social and cultural statement.

The Beatles or The Monkees?

The Beatles of course. My all time favorites are Jethro Tull and Traffic.

Why do you blog?

For me, blogging is like channel surfing. When I find something that grabs me - I post it. I enjoy the politics as well, but there are so many who are way better at commentary than I. I am so looking forward to the next elections, it'll be like going to a whorehouse with an All-You-Can-Eat buffet.

Wow. Some fun stuff. Some serious stuff. All good stuff.

Thanks, Steel for playing along! It was great. And thanks to everyone who submitted questions.