Time now for another round of The Blog Interviews! And we're going to have another good one today.

On the dias is Jack Grant of Random Fate ...

Our panel of questioners is ready ... 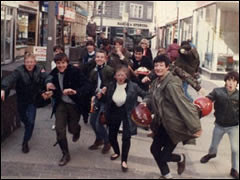 Now, for the first question ...

Hmmm... Favorite... Well, I'm a fan of the early Warner Brothers stuff, the pre-World War II Looney Tunes work mainly. The first few Daffy Duck cartoons had him really crazy, not just obnoxious as he became in the 1950s vintage cartoons, and the utter insanity - for whatever reason - continues to appeal to me.

I can't recall any single day as being the worst when it came to blogging. More frequently than I would like I read things on other blogs that are so outrageous, so hateful, that I cannot believe reasonable people actually think the ideas they wrote. I force myself to suppress my angry reactions, because posting something in anger is more counterproductive than anything else, adding to the pointless sound and fury, convincing no one to think outside of their comfort-box. When I can't stop myself from expressing my rage, I refrain from posting it to Random Fate but instead I put it on a site called Radio Saigon, which I refer to as my "immoderate" blog. I don't really promote that site, it exists to give me a place to vent so that my head doesn't explode.

Again, no single day stands out, but I've always gotten a charge when I'm asked to guest-post. It's nice when people you've never met in the flesh are willing to trust you to play in their sandbox. 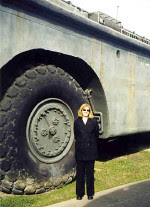 You say your European shoe size is 42... do you carry your towel with you on excursions around Europe?

Only when I'm hitchhiking..

When do you plan on coming back to the United States?

My scheduled return date is in April of 2007, but in life, things change all the time!

Now, that's an interesting question, because I had the misfortune to get my dream job immediately after graduate school. It was doing advanced R&D for a Japanese company; they had set up a lab in the US for the purposes of creating relationships with both suppliers and university researchers in our country. I had freedom that is very rare in the expensive world of cutting-edge high tech, and I had access to resources that have become increasingly scarce in the course of my 15-year career. Why do I say it was a misfortune to get that dream job right out of the gate? Because the position eventually turned into a nightmare job (which is a topic for a long blog post in itself), and no stint I've held since then has measured up. What do you look forward to once you've had your dream job and watched it turn into a nightmare? Now my dream job is to be able to write professionally, because then the resource limitations are personal, not due to bad decisions made by someone "higher up."

What's the best thing about France?

This one is tough, because there are a lot of good things here, from the wine (very good even for the inexpensive stuff), to the history (I live about 200 yards from a church built in the 13th century), to how the women all dress in a way I find very sexy (they know they look sexy and enjoy it). Maybe the best way to sum it up is I enjoy the sensuality and how the culture is not uptight about it (in every sense of the word "sensual").

Okay - maybe more seriously... you've been in France for a while now, will you be happy to come back and live in the states?

Yes, I will be very happy to return to the US. There is truly no place like home, and America is home for me. No matter how long I might live in France, I would always be l'?tranger, in my mind as well as among the inhabitants (as the recent violence has illustrated with respect to how well "the other" fits in).

Tennessee, I'll never be a Texan, too many are "all hat and no cattle." Plus, I was born in Memphis, and the house I lived in until I was 4 years old down the street from Elvis.

If you were a tree, what kind of nuts would you have?

It would depend upon if anyone was in the forest to hear if there was a sound when they fell.

Would you consider being a Nanny for a cheap salary?

Would you really consider someone like me being a Nanny for your children if I were willing to work for a cheap salary?? I live for being subversive and skeptical...

.. in your not-so-humble opine, what is the best single malt Scotch on the market for under 50 bucks?..

For about $55 you can get the Aberlour a'bunadh, which is the best single malt Scotch on the market under 150 bucks.

What is your favorite statue or sculpture?

Three weeks ago that would have been easy to answer, but after I visited the municipal cemetery in Grenoble, I saw a bronze that struck me in a way art rarely is capable for me. I posted a photo of the statue on my blog:

Before I saw that statue, I would have chosen something by Auguste Rodin, likely Danaid:

Why I like each one of these works would each merit a blog post, and I've been wordy enough here as it is! 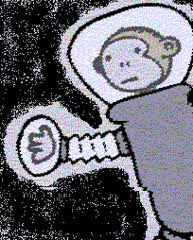 Is the name of your blog tied in any way to that INXS song?

Nope. I didn't even know there was an INXS song that had the phrase "random fate" in it. The name comes from when I was young, full of piss and vinegar and thinking I knew the way of the word as only teenagers can. My friends and I would stay up late discussing religion, and eventually we condensed our philosophical views on life, the universe, and everything down to the phrase "random fate" which eventually, decades later, became the name of my blog.

Sorry, I forgot what I was going to ask.

Anyway, thank Jack for agreeing to the interview. It was a blast. I hope we all learned something. And had fun!