We ain't been fishing in a while. Gosh, I don't know just how long its been.

We used to go fishing down to the river a lots, but ever since the nuclear plant in Baxley had that trouble and we started pulling out fish with three eyes or that could run away from you on land, we stopped going fishing there.

Sometimes we'd go over to the folks that had that big fish pond and we'd fish there. Used to do that for a bit. But we had to stop when we got caught.

So, for the longest time, we didn't go fishing none. Until last summer.

This fellow that Basil knows wanted to take lots of folks out sea fishing. And he invited Basil to go. At the last minute, something came up, and since I had met the fellow in the city jail one weekend, he said I could take Basil's place on the fishing trip.

We had a pretty good time, but I was a little worried about being that far out at sea. I'm not that good a swimmer, plus I been watching the Discovery channel and they been showing things about giant squids and storys about other strange creatures in the ocean.

Now, I don't believe in everything I see on television, but sometimes I wonder. Especially after we ran into this big fishy critter: 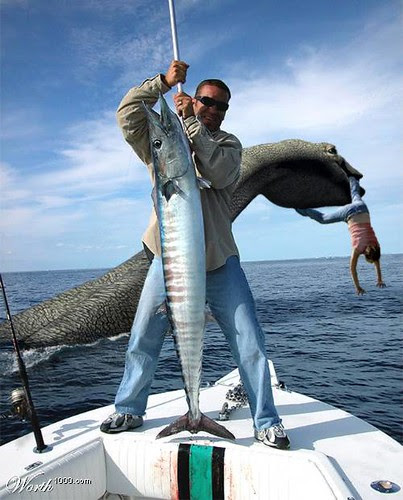 It took us better part of the afternnon to get Pat free from it, and to reel it in. Had to use four shotguns and a couple of stick of dynamite to get it where we could get it under control.