The weekend promised to be a good one from the start. The Wife and I had planned to visit Grandma. You see, we didn't get to see her at Christmas. I came down with a cold over the holidays and I didn't want to risk her catching anything from me. She is 92, after all.

We had hoped to visit last weekend, but she went to a concert in Savannah with her daughter, and we put off our visit until this weekend.

Anyway, my niece (okay, I have several nieces, but this is the one that gave me The Complete Works of William Shakespeare for Christmas), daughter of the Mean Sister (who's 5'6"), is 13 and in the 8th grade. And she was competing in the "Miss Teen" pageant for the county.

So, it promised to be a fun, pleasing, and exciting weekend. All the markings of a great weekend.

My Big Sister (who's 5'4" and very sore) had a birthday in December. And had never been in an accident with another vehicle. Oh, she had hit a deer once and wrecked her car. But had never hit another car. Nor had a car hit her.

We found out about it when we were at the high school. That's where the pageant was held.

My brother-in-law who's a prison guard in Florida showed up with his daughter and his mother-in-law. He motioned me over.

I stepped over, wondering what was up. He leaned in and said, "We're not telling Grandma or (the Mean Sister) just yet, but your daddy just ran over (the Big Sister)."

"With the car. He ran over her," he said. "She's up at the hospital with (the Little Sister) getting x-rayed right now."

I looked back at my mother and my niece (his -- and the Little Sister's -- daughter). They, of course, had ignored the idea of not telling the Mean Sister about it until we knew more. They told all they knew.

I gathered what I could from them and told the Wife I was going up to the hospital. And I did.

After finding my sisters (the Big Sister, being transported in a wheelchair and the Little Sister who was following the nurse) heading to x-ray, I followed.

After x-rays, I got the story.

My Big Sister (who's 5'4" and very sore) had just arrived in town for the pageant and saw him there, and pulled in her van behind him.

As she stopped, he backed up his vehicle. He didn't see her vehicle.

Her big, white Toyota van that was positioned against a dark background of trees and bushes.

He didn't see it. 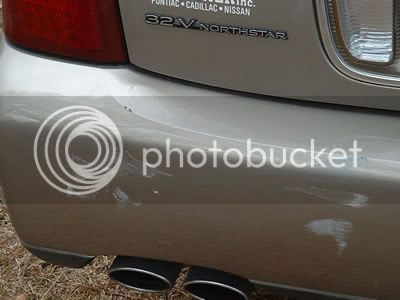 So, he backed up. Into the van. He stopped, then pulled forward.

She opened the door to get out of the van to see what damage had been done to her fender.

That's when he backed up again. This time, into the door.

The door she was half-way out of.

So, she was caught between her Toyota and the door of her Toyota ... being crushed by a Cadillac.

She yelled at him to stop and to pull up.

He stopped and pulled up.

Then backed up again. Into the door, trapping her again.

She screamed at him again to pull up, and was able to reach the back of the car and beat on the trunk with her hands. He pulled up.

This time, she was able to get back into the van and shut the door. Well, sort of shut the door; it was bent by being pushed on one side by a Cadillac and held in place on the other end by the body of my Big Sister (who's 5'4" and very sore).

And, I may have misunderstood, but I think she said he backed up into her van one last time.

Somehow, for some reason, he finally stopped backing into her.

And, you're pretty much caught up on things.

Except for my thoughts on things.

Our father will turn 75 in a couple of days. And his health has been an issue for a while. He was diagnosed with a brain tumor about 20 years ago, and shortly afterwards underwent a 17½ -hour surgery to remove it.

He was not able to drive for a bit. But finally did start driving again.

And from time to time, we have wondered if he should. After he wrecked the wheelbarrow on a major US highway (that's a story all by itself), some of us wondered aloud if he should be driving.

But, he has continued to drive.

Is this a result of his tumor and surgery 20 years ago? I don't know. That event did affect him. Following surgery, he's been a lot more subdued ... and has started voting for Democrats.

But, whether that's part of the issues with his driving? Maybe. Maybe not.

He didn't see the big, white Toyota van behind him. He didn't hear her screaming at him or beating on the trunk of his car. And after backing up and hitting something once, he pulled forward and backed up into something a second and third (and possibly, a fourth) time.

So, maybe he can't see, hear, or think well enough to drive.

I think he'd rather give up driving than run over somebody. Particularly his daughter.

But will someone say anything? I don't know. Maybe the insurance company will. If they refuse to insure him, that solves it. But, of course, it creates issues, since he's very active with a patriotic organization and travels a lot.

Maybe those days are over. Maybe he has to ride with someone from now on. Maybe it was just "one of those things, a one-time fluke."

I'm worried about her. You see, when my nephew (the Mean Sister's son) wrecked his truck three years ago, he broke his back. He was paralyzed for life. We had no idea "for life" meant 18 days.

But while everyone was concerned about his back injury, it was his chest injury that killed him.

And I'm concerned about my sister's chest injury.

Sure, the preliminary results of the x-rays and the examinations showed nothing major. But, she needs to see her doctor and get examined again. She needs to be sure she's okay.