This weekend, we begin our Blog Interviews with Bloodspite of Techography...

Our panel is ready with their questions... 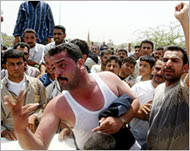 What on Earth do you do with all of your spare time?

Mostly I play with my daughter, catch up on Honey-Do Lists, work with the Sheriffs Department as a Volunteer. Work with the VA as a volunteer, and video game. Oh yea and I blog as well ;)

Two roads diverged in a wood... which road did you take?

Has it made a difference?

Do you wish you had taken the other road?

Of course! I think its human nature to ponder "What would have happened if I... ?"

What computer system would you suggest I buy if I really never use my computer for more than banking, bloggin, e-mail, and a place to store useless information?

Check out something at http://www.ibuypower.com

If your not doing massive spreadsheets, photoshopping or video games then a generic PC is pretty much all you need. Power doesn't mean much as RAM

What's the first computer you ever owned?

Commodore 64. Not the C model sadly so all I had was the 5 ¼ disks with no Hard Drive. My first Operating system that was GUI was a little none program called "Geo's" which was awesome but if you ever was locked out of it the registry system was so solid you had to purchase a new copy. My first Internet access was through a group called Q-Link which was 95% Bulletin Board Systems

If you could have any job that you wanted, anywhere ... What and where would it be?

What career would you love?

Ouch. I would love to say "Back in the Army."

But the fact is I'm almost 30 years old, I have 2 kids a wife and a house payment.

So I'd have to say I would like to be back working for Nortel again setting up Cell systems for cellular phone companies. Probably my favorite civilian job of all time to date.

I'd love to be back in the Army but I'm adult enough to admit I can't run 2 miles in a weekend let alone in 15 minutes anymore.

Definitely back to Cell towers.

Who's your favourite musician?

Ouch That's a hard one. I love Waylon Jennings. He was a guitarist for Buddy Holly before he ever went solo. I also have deep southern rock ears for groups like .38 Special and almost every group the Van Zant boys where involved in, including Blackfoot (who while not one of the Van Zant boys Rick Medlocke was in Lynyrd Skynyrd for a time and has rejoined them in the new Lynyrd Skynyrd band at present)

I also like John Gorka, Jim Croce, and Metallica so for outright favorite? I'll have to go completely left field and say Ry Cooder

What made you hook up with your wife instead of one of those bazillionares in Bentonville?

Well I met my wife in Buffalo, NY. She's from that region born and raised. Her family owns one of the largest vegetable farms in Western New York. She worked at a Mall when I met her.

She puts up with me. I'm not big on money as much as I am about being happy. You can be rich and be miserable. You can be broke and be happy or content. That's not to say money ain't nice... it's just not my big dream to win the lottery or anything. Hell I don't even play the lottery.

Who is your favorie author?

Another tough call. I love Ralph Waldo Emerson. I also like William Faulkner, Nelson DeMille, William Diehl, Tom Clancy and Louis L'Amour. If I had to answer or be beat over the head with a rock? I'd say John Steinbeck. The Grapes of Wrath is my favorite novel, hands down.

Who would be your favorite blogger to have stayed at your place?

As I've only had one blogger actually stay at my house so that would have to be That 1 Guy ;)

For about a week?

What is a job you could not do?

Factory work. There is no way I could show up at 7 am and do the exact same thing day in, day out for 8 hours 5 days a week every day

I'd lose my freaking mind.

Who's the greatest president in your lifetime?

Who's the greatest president before your lifetime?

Before? Ouch. I'd have to say Andrew Jackson. He was a large advocate of the States Rights, and took a neutral stance on so many issues that many have said he had no policy. But if you look over his handling of events such as the Nullification Crisis of 1832 you'll see he had a policy and that policy was equality and ensuring that the Federal Government did not have too much power. He felt many things should be dealt with at the state level first and foremost and then escalated to Federal in times of crisis. Something I think that should be addressed again in lieu of events such as Katrina.

You've been quoting from the "Walking Drum" alot... what's your favorite L'Amour book?

Favorite L'Amour book? Would be a toss up between "The Lonesome Gods" and "The Walking Drum" While the later is not a western in any sense it dealt with a period of time that was truly about men seeking power riches and knowledge on such a brute force scale its hard to place it in t mere words. The former I think is aptly described by simply the title. What happens to those Lonesome Gods of old?

Would I like it... meaning, Does it have pictures?

Nope, no pictures sorry. I'm not a big picture book guy. (I am a book fiend though. Hell I have a copy of Henryk Sienkiewicz 1884 novel (part of a trilogy actually) "With Fire and Sword" portraying 16th/17th Century Poland/Lithuania

Who in the military had the most influence on you?

My Command Sergeant Major or my Grandfather. Hard decision. My Grandfather made it a point for us growing up to understand how much we owed America to allow us to be free and escape the many problems brewing in Ireland when he came here.

My Command Sergeant Major believed in me, and even tho I was not the most "politically reliable" soldier he had he also knew I'd try to get the damn job done. I can't thank him enough for giving me the ability to do my job.

Do you ever wish you were back on active duty?

Every day and Never. Its something I am still coming to grips with even tho it has been years.

Civilians, I have found, have a "Break Glass in case of Emergency" when it comes to prior service members in Middle Management positions. It's a benefit to a point as they give you enough rope to do your job. The downside is its also enough to hang yourself.

Where on earth have you never been but would like to go?

Probably the last places on Earth untouched by we the people and our mad race to build mini-malls, strip shops, Applebee's and Sub Divisions.

The question is for how long?

What do you love most about your wife?

She laughs at my jokes and she opens the car door for me. She also has yet to toss me in a ditch and leave me for dead. As hyper active as I can be and as stubborn as I am, it's a bloody miracle on all counts.

Not to mention she has absolutely the best smile and keen ability to understand.

If you were travelling at the speed of light, what would happen if you turned your headlights on?

I'd be dead. So I doubt headlights would matter much to me at that point

"Good Old Boys like me" by Don Williams I think is the best description of how I feel about my life and my past.

"Life's Lessons" by Lynyrd Skynyrd would also be a hard choice

Harder still is "Semper Fi" , "Houses in the Fields", and Temporary Road" by John Gorka

Again hard to say. Maybe "The Cowboy In Me" by Tim McGraw which I've had at least 2 girlfriends and even my wife accuse of being written about me.

Again gun to the head? Nitty Gritty Dirt Band "Long Hard Road" another song I feel is close to my life.

What is your favorite time of the day?

Druidic History says that there is a time of day when nature breaths, and that all colours change and the world is finally awake and alive so you see all things with more detail.

I think that is that time, changes a bit with the seasons tho.

If you were one of Robin Hood's Merry Men, which one would you be?

That's a different one! Probably Will Scarlett. He was much the unsung hero. The name loosely means "lock smasher" and historically was one of the more violent of Robin Hood's merry men, but was also the least likely to impose violence. He was also the one who warned Robin Hood to not to go to 'Church Lees' priory for bloodletting:

'That I reade not,' said Will Scarllett,
'Master, by the assente of me,
Without halfe a hundred of your best bowmen
You take to goe with yee.

Needless to say, Robin disregards Will's advice and goes to his death.

Throughout Missouri, Arkansas, and parts of Oklahoma, there is rumored to be a Karaoke Bandit, also know as El Jefe, who steals the hearts of women, and shames the men through the arts of karaoke. Is it true that you are El Jefe???

Only on Saturday nights when the moon is full my cowboy hat is on straight and there is a phone booth nearby for changing. Oh and of course I have to sneak out of the house through the bedroom window.

Other than that never heard of him

The Twilight Zone? Or The Outer Limits?

Erg. I don't watch much TV but when I did I liked the Twilight Zone and have never seen the Outer Limits. SO I'll go with the Zone!
Thanks for agreeing to the interview. It was fun!