Today, we have another one of the stars of the blogosphere, Chris Short of Conservative Thinking... 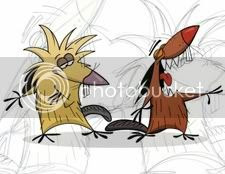 You should wear whatever makes you comfortable. However, I shouldn't be forced to explain to my daughter why someone is wearing their underwear outside of their clothing.

Why can't we all just get along?

Different strokes for different folks. I understand people have differing opinions; no two people are alike and that's a good thing. It's when people think that other people are so wrong they have to attack those with differing views (ie liberals attacking veterans and conservatives and radical muslims attacking America) is there a real problem. Those that are attacking those with differing views are the ones with the real issues.

What is George Bush's greatest fault?

Some people would say his lack of great speaking ability. But, I've seen an improvement in that regard lately. Should he say something not grammatically correct or just a little quirky the President tends to follow it up with a statement that can't be easily said by a moron. However, the President's greatest fault is his inability to get Congress and their spending under control.

What is George Bush's greatest strength?

His true belief in what he's doing. We could have easily cowered and not responded to 9/11. Instead the President has tasked the executive branch to rid the world of terrorism and has assembled a rather large coalition of other nations dedicated to that goal. The President's opposition has tried to foil the objective of making a world a better place and the President keeps on trucking.

Name one airman of the past whom you'd love to meet.

That's a tough one. I've worked with some really great people in the Army, Navy Air Force and Marines but for me to narrow it down to just meeting one Airmen of the past would just make it too difficult.

You have 56 orcs on your left, 95 kobolds on your right. In front of you are 12 green slaadi, behind are 196 jermlaine and 4 adult red dragons soar overhead. Do you serve Coke or 7-up with fishsticks?

Before I do anything I want to know why the hell they're here. If they're friendly then let Coke fall from the heavens but if they're not happy to see me then let fire reign down upon them from my rifle.

The Oak Ridge Boys or the Statler Brothers?

Neither. Speaking of which, I'd have to Google them to find out who they are.

The Beatles or the Rolling Stones?

They're all hippies but I'd have to say The Beatles.

Name one Democrat you'd vote for president in 2008.

Looking at their current front-runners I wouldn't vote for any of them. Don't get me wrong Hillary Clinton will get the nomination and I definitely wouldn't vote for her. The democratic party has some serious identity issues right now and they keep propping up folks that have lost in the past as potential leaders of this nation. No one likes a loser and when the dems talk they sound like losers that have lost elections in the past and are uninspiring. They need new blood and quick.

Name one Republican you'd not vote for president in 2008.

John McCain. There are numerous reasons the number one being he's not a Conservative in any way, shape, or form. But, I have no desire to have someone who has attempted to take away first and second amendment rights as a Senator be the President.

If you took George W. Bush's fumble mouth and Bill Clinton's moral turpitude would you have an NBC or CNN reporter?

CNN reporter Wolf Blitzer was the first person to pop in to my head. He's made some pretty interesting on air noises and I can't speak too well to his morals. Anderson Cooper seems like a man who will do whatever it takes to keep his job though and made some has made some unusual mental leaps in the past. So the answer to your question is a CNN reporter.

What inspired you to blog?

Operation Iraqi Freedom was a catalyst. There was so much news out there and I was so close to those making the news in the CENTCOM Forward Headquarters it was really hard to keep telling myself I can't start blogging until I get home (due to security reasons; I was too close to those making critical decisions). Now, I'm working for organizations that give me information about the goings-on of the world and that's the main reason my blogging has declined in frequency. It's a catch twenty-two as a milblogger these days and with the fact that you sometimes can't determine where you heard Information X (classified or unclassified sources) it makes taking up the issue of the day even more trying.

I try not to drink either one but when push comes to shove it's Caffeine Free Diet Coke for me.

With the actions of those of certain religions in the Middle East, plus your own knowledge of cults in this country, why should those on the left trust Christians?

Religion shouldn't come in to play when you talk trust. Every religion has its extremists, there's no getting around that, but when it boils down to it Christians founded this great nation and framed the laws and methods for making them over two-hundred years ago. Something can be said about that.

Any barbeque sandwich made in Shelby, North Carolina.

How many times would you serve Spam to Mouassai before you told him what it's made of?

None. I've never thought rolling a muslim terrorist in pork products would accomplish anything. Plain and simple I'm a little pissed he didn't get the death penalty. The guy is evil in the flesh and deserves to be expunged from this world.

What blog is the best-kept secret on the Web?

That's a very difficult question. Conservative Thinking could be one of those blogs but since I don't think it'd be appropriate to go on about my own ventures in the blogosphere I'd have to say, Stop the ACLU. Don't get me wrong Stop the ACLU has its fair share of readers but not the readership that it truly deserves.

What's the best thing about being a dad?

Molding a piece of clay in to what will be the outcome of years of labor, thought, planning, and execution. It's a join to have my daughter by my side everyday and nothing could possibly be better than taking her to a ball game or some other unique experience.

Chris, I really appreciate your taking the time to answer the questions this motley crew submitted. It was fun ... and informative.