Our interview today should be fun. It's Dragonlady of Dragon's Den...

The questioners are ready... 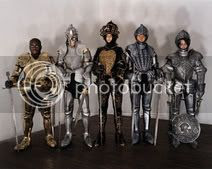 Have you ever had any strange experiences in a phone booth?

Yes I have. It was the tenth of the month. I had ten cents in my pocket. It was ten minutes after ten o'clock and the numbers I wanted to dial added up to ten. Very odd.

Probably working at a video store that my sister (Mrs.Jose Goldbloom) managed. The adult section was always a source of amusement and once I even chased down and caught our adult movie thief. Plus there was the free movie rental factor. I would have said it was singing, but I was always too nervous beforehand to really enjoy it.

What was the best venue you ever played?

A certain biker had a birthday kegger. The kegger was held in this old house on his property that they were eventually going to tear down. CRAZY NIGHT! Drunks singing over my microphone, a cat fight, getting locked into a bedroom where one of my guitarists and I were going over a song. The police eventually showed up because people were parking in such a way that it blocked the country road that the house was on. They had me announce that the cars had to be moved or they would be towed. After the announcement we promptly launched into "paranoid" by Black Sabbath.

If you had a time machine and could go back in time and meet any person, who would it be?

Hmmm... This is really hard because I LOVE history. Believe it or not I would pick Jesus to talk to. I want to know what He was writing in the sand when the scribes and pharisees brought the adulteress to him to ask about stoning her. Another person from history I'd like to meet is Jack the Ripper. To see who it was and what made him tick... and then I'd bust him lol.

Hands down it is the BOOK!

Zaphod. Zaphod is hilarious! I love the guy that played him in the movie. He had the whole narcissism/goofiness factor down.

Whatever happened to rock and roll?

Oh gawd, this is a loaded question. Especially after the whole Judas Priest debacle. I think MTV ruined rock and roll. It used to be that bands had to work and tour to earn their fan base. Now all they have to do is parade half-naked women around and come up with a 10 second hook, loop it and get it circulated on MTV. A week later they're all pop icons. Then the "pop icons" begin to believe all the hype that their companies put out to the media. Pathetic. No talent involved at all.

Did video kill the radio star? Or were we already hearing just radio ga-ga?

Video definitely killed the radio star and it's just not ga-ga we're being bombarded with, it's do-do.

Why did you go back to school?

I had been in management for a while and was getting to the point where I hated going to work. It was like babysitting. So when I mentioned going back to school to my husband he immediately brought me literature from work (he teaches at the university). Before I knew it I was enrolled and a student.

I'm going back to school at age 47. Although you're younger, what do you think might be the toughest thing for me?

The black and white version of "Night of the Living Dead. I also liked Creature From the Black Lagoon and Dawn of the Dead (old one).

What was your best Christmas ever?

The first Christmas my husband and I were married.

It's kind of a tie between Halloween and Christmas. I love decorating for both, and both have a special meaning for me. Christmas being the celebration of Jesus' birth and Halloween as rememberance/respect for the dead... and there is the whole dressing up thing.

Were you ever told "I hope you have a child just like you?"

Heh, yes I have! But mostly Mom said it about Goldbloom... lol.

Ohhhh I got something much worse. My youngest daughter Tess! Potty-training her was like trying to teach a hampster how to read the newspaper... impossible. And you know what? I hope she has a daughter just like her.

Thank you, Dragonlady, for a fun interview. We appreciate your agreeing to this silliness, and thanks for answering the questions.