Today, it's a blogger that's also a writer. And, yes, I think there's a difference. Today, we have an interview with Lieutenant K of Wordsmith at War...

Everyone has their questions ready... 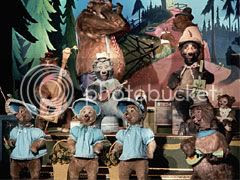 Are you able to read blogs from Iraq or only to post?

I'd have to say managing a New York style pizzeria. I had just moved to Salt Lake City, and got a job as assistant manager of a place called DeLoretto's Pizzeria. Everything was made by hand, and we hand-tossed all the pizza dough up in the air. The people I worked with, and the general atmosphere of the job made it a lot of fun.

The dream that the pen describes.

What's the hardest thing about being deployed?

Being separated from my children for 18 months.

Do you have anything - special - to say to the barking moonbat brigade in response to their claims that what you're being "forced" to do is evil, wrong and likely to have no worthwhile impact on the world other than the deaths of American soldiers?

I would simply say that we are a volunteer force. Nobody was forced to become a soldier. We are doing a service to any and all that are against the threat of global terrorism. I guess if you are a terrorist, then what we are doing may be seen as evil or wrong. Here are some links which I believe relate to your question:
Link 1 and Link 2

Does the New York Times have All The News That's Fit To Print?

Definitely not. I was very glad when they invited me to write for them for a couple of months as an op-ed columnist in Iraq. They did not edit or change what I wanted to say in the least. In general, I think the main stream media does a very poor job of telling our story.

Honestly, I don't have strong enough feelings for anyone's blog that I think they should quit blogging. Maybe I just don't read blogs I don't like.

What's the most Redneck / White trash thing you've ever done?

Buying Pabst Blue Ribbon beer, drinking a lot of it, and going around a residential area of New Orleans throwing eggs at houses. This was in the 80s- high school.

Lots of sugar and cream.

Do you get decent coffee over there?

People are so generous and kind. We get Starbucks, and almost any other type of coffee you can think of sent to us. I, for one, have cut down on my coffee intake drastically while I've been in Iraq. It's just too damn hot. In the winter, though, I'd have my morning cup of joe.

Who is your favorite writer?

I like so many writers and styles of writing that I can't pick just one. I love to read Steinbeck, Faulkner, Annie Proulx, and Cormac McCarthy just to name a few.

What one thing about officers should every enlisted man know ... but doesn't?

We have all either been enlisted ourselves, or been told a million times in officer training that NCOs and enlisted soldiers are the backbone of the Army. In fact, NCOs usually train us in our officer courses. So there is no excuse for an officer trying to do an NCO's job.

When you return to New Orleans, where's the first place you're going to go?

I live in Salt Lake City, so I'll be going there first. But I will be getting down to New Orleans as well, and the first place I'm going is a good oyster bar in the French Quarter where I can sit quietly, listen to some local music, drink my beer, eat some seafood, and maybe even tell some war stories if anyone wants to hear.

What was the stupidest thing you ever did as a teen/young man?

There was this old abandoned barge on the West bank of the Mississippi River that had been there so long it was part of the shore. At one end, there was about a 30 foot drop to the ground below. And there was also a rope hanging from a tree about 10 feet out from the edge. On a dare, I tried to jump off the barge and catch the rope. I broke my ankle, and had to wear a cast all summer. Stupid.

How many moonbats does it take to screw in a lightbulb?

One. They just hold the lightbulb up while the rest of the universe rotates around them.

What was the first blog you ever read?

think it was Chief Wiggles, back around 2003.

Why choose one? They were both great.

Thank you Lieutenant K, for agreeing to this interview ... for your writing ... and for your service. We thank you for all three.