After winning 9 in a row, the Columbus Catfish have now dropped 2 straight to the Charleston Riverdogs (Yankees), losing a 3-1 contest tonight.

Charleston starter Erick Abreu was nearly unhittable for 6 innings, allow just 3 hits, one being 3B Eduardo Perez's home run off the Day's Inn sign in left field. It was the only run the Catfish could manage. Abreu struck out 6 and didn't walk any batters. The Catfish managed 4 hits off the Charleston bullpen, but 2 double plays helped keep them off the board. SS Ivan De Jesus was the only Catfish player to manage 2 hits.

Things appeared to be going a different way when the game started. CF Bridger Hunt and De Jesus, the first 2 Catfish batters, led off the Catfish 1st with singles. But those were the last hits Abreu allowed other than Perez's homer.

Defensively, the Catfish kept the game close with some great plays. Among them were RF Lucas May's diving catch in the 1st inning that robbed Charleston DH Tim Battle of a possible double ... and a possible run when the following batter singled.

In the 5th inning, Lucas threw out Charleston CF Austin Jackson who should have made third base on 3B Marcos Vechionacci's single. From right field, he one-hopped the ball to 3B Eduardo Perez who tagged Jackson. That also saved a run when a passed ball occurred on the next batter.

The Catfish, who averaged nearly 7 runs a game during their winning streak that twice saw them hit double-digits in runs, were held to a single run.

The 4-game series with Charleston ends Sunday, then the Catfish host the Rome Braves in the last 4 home games of the year. 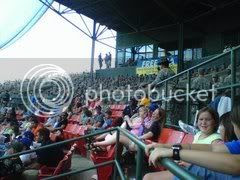 Tonight was Military Appreciation Night at the Catfish game. All military personnel got in free with ID. A few thousand took them up on it. No attendence figures were announced, but the sea of ACUs (the replacement for the BDUs and DCUs like I wore) was great to see.

The soldiers ... and the soldiers families that were there ... seemed to enjoy the game, despite the final score.

The Catfish have offered half-off to military and their families all year long, but few have taken them up on it. Of course, they've had several Military Appreciation Nights this season, and in previous seasons. It's great when the soldiers from Ft. Benning can make it to the game and relax. Minor league baseball is a great bargain. And good family entertainment. And all of the teams I've visited seem to appreciate our servicemen and women.
By Basil at 8/26/2006 06:37:00 PM