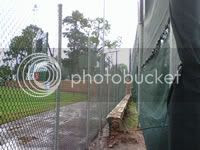 Tonight's game between the Columbus Catfish and the Charleston Riverdogs (Yankees) was postponed. You see, it rained the last couple of days. But not where I was today (10 blocks away). Still, the field doesn't drain well, so unless someone gets a hose and pump and runs it to drain the field, it's gonna be wet. And it was wet.

Unplayable field conditions due to continuous rainfall since Sunday have postponed the game against the Columbus Catfish and the Charleston Riverdogs. The game will be made up as part of a double-header on Friday starting at 6 pm. Gates will open at 5pm. Tickets for Thursday's contest can be redeemed at the Catfish box office for any of the remaining home games left in the season.

Fridays and Saturdays all season the Fox 54 Family Fun Pack gets you four tickets, four hot dogs, four soft drinks and a souvenir program for just $20. The 'Fish with a Cause Campaign showcases Our House Methodist Children's Home. After the game kids run the bases like their favorite players. For tickets or more information call (706) 571-8866 or visit www.ColumbusCatfish.com.

Friday night was the scheduled "Fan Night" for the promotion the Catfish were running to have a night named after a fan. And I strongly suspect it's not me.

While the Catfish don't seem to have a lot of loyal fans, they do have some. I'm by no means the only fan. I'm just the one with a blog. Except for some of the media folks.

And you know, some of the media people in Columbus do support the local teams, the Catfish included. So, it would be reasonable for one of them to be named.

But I think some of the others that are always at the game are quite deserving. Yeah, I'm a fan. And I certainly do thank everyone who sent emails to the Catfish on my behalf. The Catfish office was amazed by the response. Not just how many sent in emails, but the fact that just about all of them were from outside Columbus. Heck, most were from outside Georgia. And lots were from outside the southeast.

So, yeah, they noticed your participation in the promotion. It didn't get a night named for me, but it darn sure got noticed. And I thank you.

Oh, The Princess will be coming to Ft. Benning, where her boyfriend is stationed following his graduation from West Point. So we'll get to spend some time with her ... and him ... this weekend. Perhaps they'll make it to one of the games Friday night. But she's got a long drive from Athens. So, maybe Saturday's game.