On Sunday, the Catfish beat Rome when the game was called after 5 complete innings because of rain. Tonight, they couldn't get 5 innings completed before the weather forced a stop.

The game will resume in the bottom of the 5th at 6:00 PM Tuesday, and the remainder of the 9-inning contest will be played. It will be followed by a 7-inning game. 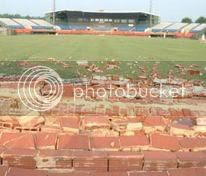 photo: Columbus Catfish
When the Catfish return home from their short road trip up to Rome, they'll have another issue to contend with. While heavy rains interferred with the game in Rome, heavy winds were wreaking havoc on Golden Park in Columbus.

The center field wall collapsed, and damage was done to the pressbox, the scoreboard, the billboards, and a light tower. Additionally, there was damage to the playing field.

The plan is for a temporary fence to be erected in center field in time for Thursday night's homestand opener. If everything is repaired sufficiently by Thursday, the Catfish' final homestand of the year will take place with several promotions that have been delayed by weather rescheduled for this week.
By Basil at 8/21/2006 06:13:00 PM