First, everything's okay. So now you know how the story ends, here's the story. Or part 1 anyway.

Friday night, after I picked the Wife up from work, we started home. About five miles or so from home, my left arm started feeling funny. Tingling. Numb.

Now, I'm in pretty decent health, generally. I'm overweight a little (is 30 pounds "a little" for someone 6'2"?), but generally not too bad for someone my age.

That kind of thing is in the back of my mind, particularly when my left arm suddenly gets numb/tingly. Now, without a medical background, and not having done any research into that, I don't know if that means heart problems. I now assume not.

Still, it bothered me for about five minutes, then I got a little light-headed. And my face felt sort of numbly (numb/tingly) too. Well, not the whole face. But about a Phantom of the Opera mask-sized area on the left side.

That was when I pulled over and asked the Wife to drive. To the hospital.

Now, I don't know if it was payback time, but she decided to take me to the same hospital she went to when she had the cock-fight.

The Medical Center is what you thing of when you think of hospital waiting room hell. And that's where she drove.

Now, I'm not sure if it's the thought of what she could pay off with four times yearly salary, but she took me to that same hospital.

So, when she drove right past the emergency room entrance, I'm thinking, this is going to be one of those nights.

She let me out at the main entrance, and I walked in and asked how to get to the E.R. The kind ladies gave me directions while the Wife parked the car.

I made my way down the sidewalk to the E.R. and walked in. The lady at the window was telling everyone that got to the front of the line "It'll be a long wait" before they even said what was wrong. I guess if they were able to stand and weren't bleeding on her, they got the "long wait" speech and told to fill out the form.

When it was my turn, I did just that. Then sat down to wait.

The Wife came in from parking on the far side of the parking lot and sat down. And we waited.

Across from us was a young lady who appeared to be having stomach trouble. She didn't eat the Chic-Fil-A nuggets the fellow with her offered her. And she was holding either a see-through barf bag, or the largest condom I have ever seen.

Over in the far corner was a man who brought a cooler. I don't know if it was his lunch, or a spare kidney, or what.

To our left was an older fellow in a wheelchair who was getting wheelchair driving lessons from a similarly-aged woman. But he did have someone to wheel him outside for a cigarette. I wonder what he was in the E.R. for. I'm assuming not a severe cough.

Every so often, someone from the back would come out and call a name ... and no one would respond. We wondered if they ought to check the morgue. 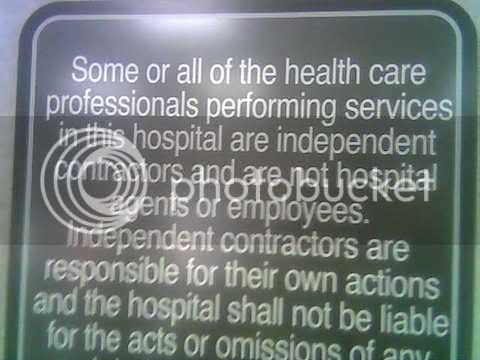 We sat there while others came in, got the speech from the non-employees behind the counter, and they coutinued to line the waiting room.

After about an hour, I told the wife that if waiting all that time was okay, then I probably didn't have an emergency. They heard my symptoms and didn't move me to the front, so I must have been in no worse shape than anyone else.

So, if waiting was okay, I wasn't having a heart attack. Or, if I was, and it took me falling over to get seen, it'd probably be too late anyway, so I figured it was a waste of time being there.

The wife asked about going to St. Francis Hospital. Which sounded like a good idea to me.

I mean, if Rush Limbaugh can doctor shop, I can E.R. shop.

So, we left and went to the other hospital. I mean, my arm and face were still numbly and all. So we went to St. Francis.